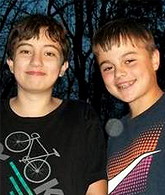 The Village Idiot:
"Councilman Takes the Cake"
By Joel Bowman
“Earlier this week, we came across the story of young Andrew DeMarchis and Kevin Graff, a couple of 13-year old students who were caught selling cupcakes and baked goods at their local market. The two hoodlums were discovered peddling a range of treats, from cookies to brownies…even Rice Krispies.
As is often the case with aspiring criminals, this was not the first time the boys had flouted the law. Readers may be shocked to learn that this was actually the second time these would-be ruffians had conducted their illicit activities in public. On the first occasion, another bake sale, the boys managed to net a cool $120 in profit. And, like greedy capitalists the world over, the team invested half the loot to buy a cart from Target and even expanded their operations to include the sale of water and Gatorade. Who knows how many treats the boys might have sold or how large their empire of dough-sponsored delinquency might have grown if left unchecked by the authorities. They had, according to one report, told a few members of their trusted inner circle (their Moms and Dads) of their intentions to one day open their own restaurant.

Clearly, something had to be done. Enter our hero, local Councilman Michael Wolfensohn. Upon hearing of the boys vast and expanding operation down at the local market, Wolfensohn, his superhero cape sewn with the very threads of truth and justice, decided to act. Doing what any unquestioning citizen living in a police state would do after learning that two boys had decided to sell cupcakes, Wolfensohn called the cops. On Saturday, October 19, after about an hour of business – during which the perpetrators had raised around $30 (in cash) – police arrived on the scene. The store – and the seed of a crime syndicate that may one day have rivaled all the government agencies of the world combined – was shut down. Justice: 1; Kids trying to sell brownies: 0. “All vendors selling on town property have to have a license, whether it’s boys selling baked goods or a hot dog vendor,” explained Wolfensohn.
When asked by the boys’ parents whether he might have just informed them that they needed a license rather than calling the police, Wolfensohn laid out his watertight case. “In hindsight, maybe I should have done that, but I wasn’t sure if I was allowed to do that,” he said, demonstrating an admirable incapacity to think for himself. “The police are trained to deal with these sorts of issues,” he added.
We can only hope their brush with the law sets these two lads back on the right path, one that excludes entrepreneurial ambition and fosters a healthy fear of the state. As for Wolfensohn, this editor would like to formally recommend him for a senior position with the TSA, where no incident is too small to completely blow out of proportion and no threat, imagined or actual, is too big to miss altogether.”
- http://dailyreckoning.com/councilman-takes-the-cake/
http://gothamist.com/2010/11/20/cupcake-narcing_politician_blames_i.php
Posted by CoyotePrime at 9:24 AM