“Chart of The Day: The Working Poor” 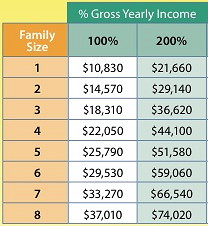 “Chart of The Day: The Working Poor”
by Felix Salmon
“This chart comes from a Working Families Project report, and it underscores how the Great Recession has hit the working classes just as much as it has the unemployed. The baseline here — 200% of the poverty level — might sound high enough to be comfortable, but it isn’t: we’re talking a total household income of $36,620 for a family of three, or $44,100 for a family of four. (I’ve put the full chart, taken from here, over to the right.)
As the report says, nearly 1 in 3 working families in the United States, despite their hard work, are struggling to meet basic needs. The plight of these families now challenges a fundamental assumption that in america, work pays. The workers in these families have a much greater risk of becoming unemployed than the population as a whole, and of course they’re financially much less prepared for any period of unemployment than most of the rest of us.

Michael Fletcher has a good write-up of the report, describing the working poor starkly as “people who earn wages so paltry that they are struggling to survive”, and showing that they’re unlikely to get much help from the government: "With a spate of fiscal conservatives poised to enter Congress and with policymakers more tightly focused on the nation’s huge budget deficit, the prospects of maintaining past spending levels on programs that help enable social mobility are dimming. Many states also are reeling, causing them to raise college tuitions and, in some cases, consider cuts in public school funding.
If the unemployment problem risks becoming politically invisible, then the plight of the working poor was never visible in the first place. But looking at this chart, it’s easy to see why large swathes of America are angry at their government. If Barack Obama wants to understand and fight back against the fundamental drivers of Tea Party sentiment, he should concentrate on precisely these numbers.”
- http://blogs.reuters.com/
Posted by CoyotePrime at 10:15 AM