Geophysics: "Why is The North Magnetic Pole Racing Toward Siberia?"

"Why is The North Magnetic Pole Racing Toward Siberia?"
by John Matson
"Finding Santa Claus's home at the North Pole is easy on a globe - just look for the point on top where all the lines of longitude meet. But that is just the "geographic" North Pole; there are several other definitions for the poles, all useful in different scientific or navigational contexts. Among the many north poles, let us rejoice that Santa Claus did not choose the magnetic pole for his home, for he would have to spend as much time moving as delivering presents. 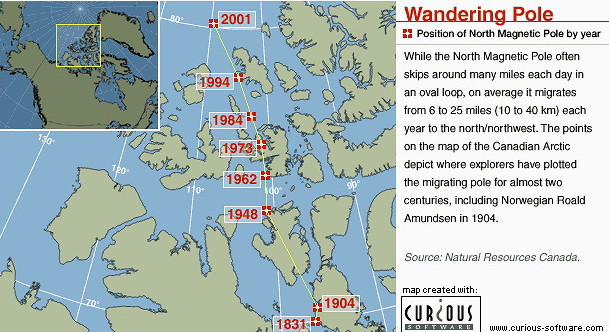 The north magnetic pole (NMP), also known as the dip pole, is the point on Earth where the planet's magnetic field points straight down into the ground. Scottish explorer James Clark Ross first located the NMP in 1831 on the Boothia Peninsula in what is now northern Canada, and with the planting of a flag claimed it for Great Britain.
But the NMP drifts from year to year as geophysical processes within Earth change. For more than 150 years after Ross's measurement its movement was gradual, generally less than 15 kilometers per year. But then, in the 1990s, it picked up speed in a big way, bolting north - northwest into the Arctic Ocean at more than 55 kilometers per year. If it keeps going it could pass the geographic north pole in a decade or so and carry on toward Siberia. But why?

One compelling explanation appears in the December 21 Eos, the weekly transactions of the American Geophysical Union. In their "Eos" article (subscription required), and in a longer paper published earlier in 2010 in the "Journal of Geophysical Research" - "Solid Earth", Arnaud Chulliat of the Institute of Earth Physics of Paris and his colleagues venture that a twisting molten plume beneath the Artic could be the cause: "According to some recent models, plumes of less dense fluid form at the inner core boundary and subsequently rise within [a cylinder] whose central axis is the Earth's rotation axis. Such plumes undergo a strong helical motion due to the Earth's rapid rotation, a phenomenon also observed in laboratory experiments with water. In the core, helical plumes advect and twist the magnetic field lines, forming what scientists call "polar magnetic upwellings."
Those upwellings, unloaded into the Arctic mantle, could produce intense patches of magnetic activity on the sort of decade-long timescales needed to explain the NMP's sudden acceleration. (The authors compare these patches to a kind of terrestrial version of sunspots.) And magnetic field measurements show dramatic shifts near the New Siberian Islands that seem to fit the bill.

"What happened under the New Siberian Islands at the core surface is that the rate of change of the magnetic field changed by a large amount during the 1990s," Chulliat says. That activity, he and his colleagues have found, could account for a large portion of the NMP's acceleration. But whether magnetic field changes under the New Siberian Islands and the speeding north magnetic pole ultimately arise from a twisted plume of fluid rising through the core remains unproved, Chulliat and his co-authors note. A resolution of the mystery will await better modeling, along with more data from satellites monitoring the Arctic's magnetic environment. The necessity of satellites, interestingly enough, is a consequence of the pole's recent movement - as the NMP drifts farther out to sea, it becomes harder and harder to reach the region with magnetometer-equipped aircraft."
- http://www.sott.net/
Posted by CoyotePrime at 1:17 PM