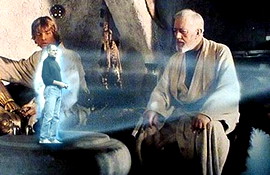 “Apple Patents 3D Holographic Display”
by Richard Gray
“A recently granted patent reveals that Apple, the company behind the iPod and iPhone, has been working on a new type of display screen that produces three dimensional and even holographic images without the need for glasses. The technology could be used to produce a new generation of televisions, computer monitors and cinema screens that would provide viewers with a more realistic experience.

The system relies upon a special screen that is dotted with tiny pixel-sized domes that deflect images taken from slightly different angles into the right and left eye of the viewer. By presenting images taken from slightly different angles to the right and left eye, this creates a stereoscopic image that the brain interprets as three-dimensional. Apple also proposes using 3D imaging technology to track the movements of multiple viewers and the positions of their eyes so that the direction the image is deflected by the screen can be subtly adjusted to ensure the picture remains sharp and in 3D.

The patent claims this technology would also create images that appear to be holographic because of the ability to track the observers movements. It states: "An exceptional aspect of the invention is that it can produce viewing experiences that are virtually indistinguishable from viewing a true hologram. Such a "pseudo-holographic" image is a direct result of the ability to track and respond to observer movements. By tracking movements of the eye locations of the observer, the left and right 3D sub-images are adjusted in response to the tracked eye movements to produce images that mimic a real hologram.

The invention can accordingly continuously project a 3D image to the observer that recreates the actual viewing experience that the observer would have when moving in space around and in the vicinity of various virtual objects displayed therein. This is the same experiential viewing effect that is afforded by a hologram. It allows the observer, for example, to move around a virtual object and top observe multiple sides from different angles."

Three dimensional televisions are set to be next years must have gadget as many major electronics manufacturers have launched 3D-ready televisions and blu-ray players. Sky has also launched a 3D TV channel while many movies are now being filmed in 3D for viewing at the cinema.

Most of these technologies require viewers to wear glasses that allow the right and left eye see slightly different images to produce the illusion of a three dimensional image on the screen. Apple's patent, however, has now raised speculation that the computer giant may be aiming to branch into the 3D domain by looking to abolish the need for glasses and even go further by offering the chance for holographic films. Holographic movies, however, would require new filming techniques currently not being used by the movie industry to ensure actors are filmed from multiple angles.

Initially the holographic displays may be used for computers and the patent suggests a solution to allow users to walk around an object without ever having to go behind a screen. It proposes using "holographic acceleration" - where the image moves faster relative to the observers' own movement so they would only need to walk in a small arc to see all the way around the holographic object.

Leander Kahney, a consumer technology expert and author of the Cult of Mac, said: "At present, Apple seems an unlikely company to get into the 3D TV business, which is struggling, but if Apple cracks the technology it could help make 3D the dominant display technology. It certainly does away with the biggest problem - the 3D glasses. As well as watching 3D movies, Apple's system would have a ton of applications in science, engineering, design and education, while 3D iPhones and iPads would be killer. It's easy to imagine things like amazing 3D textbooks and instructional videos. 3D gaming on an iPad would be an incredibly immersive gaming experience." Apple said it does not comment on patents.”
- http://www.sott.net/
Posted by CoyotePrime at 4:06 PM