Technology: "What is ‘Cloud Computing’?" 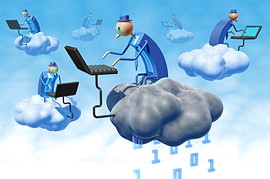 "What is ‘Cloud Computing’?"
by Jason Douglass
"‘The Cloud’ – A New Buzz Word: You’ve probably begun to hear a brand new buzz word being thrown around. Maybe you caught wind of it circulating around the office or maybe that annoying cousin that you only talk to in case of technologic emergency dropped it into conversation a couple times. In all likelihood, you feigned comprehension but one thing should be completely clear by now — ‘cloud computing’ is coming.

What is ‘Cloud Computing’? Cloud computing is an internet-based computing model. This is in stark contrast to the traditional model for computing where almost all processes take place on the user’s system. The cloud, a euphemism for the internet, will provide all the software used by your computer. Users will no longer be the owners of software but rather tenants paying a subscription to use them. In addition, all processing and related data will take place in ‘the cloud’ and not on the users personal computer. Accolades have been building into a unanimous chorus and the general perception is that this new model for computing will save money on capital expenditures for hardware, software and services because users will only pay for what they use. But when has any technological innovation ever been about saving the consumer money? The answer must be a resounding never!

So what is cloud computing really? Just like global warming, cloud computing is an attempt to create an entirely new market and subsequently a brand new revenue stream for multinational tech giants while allowing them to maintain complete control of their products. In the spirit of full spectrum domination ‘The Cloud’ also has many other lucrative uses in a ‘new world order’. In an article, "How Secure is The Cloud?", an argument is made in an attempt to counter fears that ‘The Cloud’ is insecure. Having all your personal data floating around in a cloud on some unknown server(s) raises obvious concerns over security and this article attempts to ease those fear shared by IT professionals.

"Security of Cloud Computing Users: A Study of U.S. and Europe IT Practitioners", Published: 6 May 2010: "CA and the Ponemon Institute conducted a cloud security survey of U.S. and Europe IT and IT security professionals. The findings show that about half of the respondents don’t believe the organization has thoroughly vetted cloud services for security risks prior to deployment. It also showed that 55 percent of respondents are not confident they know all the cloud services in use in their organization today.

The overall study calls for a need for IT and Security professionals to embrace the cloud and help their organizations more securely adopt cloud services. Of course, the ‘security’ they mention in this study is not to be confused with a question of privacy but simply denotes the security of ‘the cloud’ in terms of system exploits. While this allows protection from hackers, data is ultimately left wide open for the new war on terror spearheaded by events like wikileaks cable leaks. In other words, your information will be even more easily available to those agencies policing the web in the name of security.

Recently, examples of abuse have been uncovered where the FBI is under suspicion of planting backdoors in OpenBSD IPSEC stack. As if it weren’t completely obvious that our government is tightening the reins, these moves show the real motives behind our government’s involvement in technology development."

The Final Unveiling of the Control Grid: We are moving in a dangerous direction. The current incarnation of the internet is far too open for our controller’s comfort. So a new internet is being rolled out; one that will control its users absolutely. All computing will be done offsite and instead of policing individual users, which often sounds illegal, government agencies can just surveil the ‘anonymous’ cloud. Of course, they already know exactly who you are and will soon be able to remotely kill your computer at will. I don’t know about you but I feel much more ‘secure’."
- http://beforeitsnews.com/
•
Related article: "Cloud Computing Makes FBI Access to Documents Easy"
http://www.dvorak.org/
Posted by CoyotePrime at 12:23 PM