"U.S. Is Bankrupt and We Don’t Even Know It" 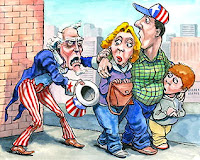 "U.S. Is Bankrupt and We Don’t Even Know It"
by Laurence Kotlikoff
"Let’s get real. The U.S. is bankrupt. Neither spending more nor taxing less will help the country pay its bills. What it can and must do is radically simplify its tax, health-care, retirement and financial systems, each of which is a complete mess. But this is the good news. It means they can each be redesigned to achieve their legitimate purposes at much lower cost and, in the process, revitalize the economy.

Last month, the International Monetary Fund released its annual review of U.S. economic policy. Its summary contained these bland words about U.S. fiscal policy: “Directors welcomed the authorities’ commitment to fiscal stabilization, but noted that a larger than budgeted adjustment would be required to stabilize debt-to-GDP.” But delve deeper, and you will find that the IMF has effectively pronounced the U.S. bankrupt. Section 6 of the July 2010 Selected Issues Paper says: “The U.S. fiscal gap associated with today’s federal fiscal policy is huge for plausible discount rates.” It adds that “closing the fiscal gap requires a permanent annual fiscal adjustment equal to about 14 percent of U.S. GDP.” The fiscal gap is the value today (the present value) of the difference between projected spending (including servicing official debt) and projected revenue in all future years.

Double Our Taxes: To put 14 percent of gross domestic product in perspective, current federal revenue totals 14.9 percent of GDP. So the IMF is saying that closing the U.S. fiscal gap, from the revenue side, requires, roughly speaking, an immediate and permanent doubling of our personal-income, corporate and federal taxes as well as the payroll levy set down in the Federal Insurance Contribution Act. Such a tax hike would leave the U.S. running a surplus equal to 5 percent of GDP this year, rather than a 9 percent deficit. So the IMF is really saying the U.S. needs to run a huge surplus now and for many years to come to pay for the spending that is scheduled. It’s also saying the longer the country waits to make tough fiscal adjustments, the more painful they will be.

Is the IMF bonkers? No. It has done its homework. So has the Congressional Budget Office whose Long-Term Budget Outlook, released in June, shows an even larger problem.

‘Unofficial’ Liabilities: Based on the CBO’s data, I calculate a fiscal gap of $202 trillion, which is more than 15 times the official debt. This gargantuan discrepancy between our “official” debt and our actual net indebtedness isn’t surprising. It reflects what economists call the labeling problem. Congress has been very careful over the years to label most of its liabilities “unofficial” to keep them off the books and far in the future.

For example, our Social Security FICA contributions are called taxes and our future Social Security benefits are called transfer payments. The government could equally well have labeled our contributions “loans” and called our future benefits “repayment of these loans less an old age tax,” with the old age tax making up for any difference between the benefits promised and principal plus interest on the contributions. The fiscal gap isn’t affected by fiscal labeling. It’s the only theoretically correct measure of our long-run fiscal condition because it considers all spending, no matter how labeled, and incorporates long-term and short-term policy.

$4 Trillion Bill: How can the fiscal gap be so enormous? Simple. We have 78 million baby boomers who, when fully retired, will collect benefits from Social Security, Medicare, and Medicaid that, on average, exceed per-capita GDP. The annual costs of these entitlements will total about $4 trillion in today’s dollars. Yes, our economy will be bigger in 20 years, but not big enough to handle this size load year after year. This is what happens when you run a massive Ponzi scheme for six decades straight, taking ever larger resources from the young and giving them to the old while promising the young their eventual turn at passing the generational buck.

Herb Stein, chairman of the Council of Economic Advisers under U.S. President Richard Nixon, coined an oft-repeated phrase: “Something that can’t go on, will stop.” True enough. Uncle Sam’s Ponzi scheme will stop. But it will stop too late. And it will stop in a very nasty manner. The first possibility is massive benefit cuts visited on the baby boomers in retirement. The second is astronomical tax increases that leave the young with little incentive to work and save. And the third is the government simply printing vast quantities of money to cover its bills.

Worse Than Greece: Most likely we will see a combination of all three responses with dramatic increases in poverty, tax, interest rates and consumer prices. This is an awful, downhill road to follow, but it’s the one we are on. And bond traders will kick us miles down our road once they wake up and realize the U.S. is in worse fiscal shape than Greece. Some doctrinaire Keynesian economists would say any stimulus over the next few years won’t affect our ability to deal with deficits in the long run. This is wrong as a simple matter of arithmetic. The fiscal gap is the government’s credit-card bill and each year’s 14 percent of GDP is the interest on that bill. If it doesn’t pay this year’s interest, it will be added to the balance.

Demand-siders say forgoing this year’s 14 percent fiscal tightening, and spending even more, will pay for itself, in present value, by expanding the economy and tax revenue. My reaction? Get real, or go hang out with equally deluded supply-siders. Our country is broke and can no longer afford no- pain, all-gain “solutions.”
- http://www.bloomberg.com/
•
Laurence J. Kotlikoff is a professor of economics at Boston University and author of “Jimmy Stewart Is Dead: Ending the World’s Ongoing Financial Plague with Limited Purpose Banking.” The opinions expressed are his own.
•
Related site of interest: http://www.defeatthedebt.com/
Posted by CoyotePrime at 11:16 AM

Email ThisBlogThis!Share to TwitterShare to FacebookShare to Pinterest
Labels: kotlikoff bankrupt us economy