The Wars: “A Far From Happy New Year” 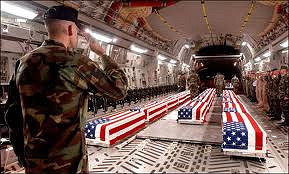 “A Far From Happy New Year”
By William Pfaff
"As long as a country is at war, its citizens will put up with personal deprivation.  But, the citizens must think that it is a just war, that the enemies are devils whom they are morally obliged to exterminate. The psychology behind Hate Week is precisely that of working up both party members and proles into a frenzy of self-righteous hate for the enemy, pushing out of their minds all thought of the unsatisfactory lives that they themselves are living." - George Orwell, "1984"
“The United States will begin 2011 waging one major war that is now ten years old and showing serious signs of being lost. Another of its wars, Iraq, has already been lost by the objective standards of who now controls the country and who can be expected to continue controlling it—certainly not the U.S., but Iran, America and Israel’s main enemy in the region. The U.S. has engaged itself in a similar role of combatant in a half-dozen smaller conflicts against self-proclaimed enemy bands in Yemen, the Horn of Africa and western North Africa.

It also possesses by far the largest armed forces on Earth, which demand from a profoundly indebted nation still more sophisticated equipment and better recruits, since the Americans it is now enlisting, by standard U.S. military criteria of IQ and level of education, come from the bottom of the barrel of eligible men and women, so that it has become increasingly necessary to recruit from immigrant and foreign populations. The paradox that is seldom discussed in politics or the press is that this country, with total military resources equal to those of all the rest of the world combined, wages wars that consistently turn out badly, leaving American enemies in power. I am considered unpatriotic for bringing this up; however, other countries have noticed.

Since the Korean war (a draw, plus a cease-fire that remains dangerously unresolved) and the Vietnam War (away from which the unsuccessful U.S. tip-toed, while continuing to issue empty threats which had no public backing), the U.S. has won wars only against former CIA “asset,” Colonel Manuel Noriega of Panama, a Cuban airport construction crew on Grenada, and Saddam Hussein, thereby delivering Iraq into the hands of Iran.

Why? The obvious reason is political. American forces have consistently been sent out to accomplish what military force can’t do. Military forces can defeat other organized military forces. They can occupy the lands of other peoples (thereby becoming corrupted themselves by the system of organized injustice this requires). They can overturn regimes, free slaves, loot and destroy. They cannot do what Washington thinks they can do, which is to change the way people think.

Or indeed to change what others believe. The war “against terror” began as simple vengeance against people who, more often than not wrongly, were supposed to “hate us for our freedoms.” Vengeance had to be rationalized at some point, so the wars against Afghanistan and Iraq were turned into wars to create democracies. Stamped upon American minds, often the best of them, has been the sentimental belief of Woodrow Wilson that America has a God-given mission of world reform and of wars to end war. The fact that such wars are nonetheless wars themselves, and that none has had the slightest chance of “ending” war as a human phenomenon, have yet to discredit this 20th and 21st century American ideology.
Therefore, one must ask what good it does to have colossal military forces, when—whatever damage they do to the people they attack—they don’t change anyone’s minds or beliefs. Or, to the extent that they do, it is to create even more “hatred”—not of “America’s freedoms” but of the United States of America itself.

What goes on now confuses democracy promotion with old-fashioned aggressive war in order to seize territories or resources. Neither works. The Obama government certainly does not intend to take permanent control of Afghanistan. It would not succeed if it did. It would simply perpetuate a war of nationalist resistance to any new American-installed regime, as well as immerse the U.S. in the violent and complicated politico-religious struggle between Pakistan and India over Kashmir, the permanent efforts of Afghanistan’s Central Asian neighbors, Iran included, in addition to Kazakhstan, Uzbekistan, Tajikistan, Turkmenistan and China, to influence the affairs of the region, all to no purpose that threatens the U.S.

I am aware that there is energy in the region, and I also am aware of Pentagon scenarios concerning world domination of oil so as to keep American cars on the superhighway and American fighter-planes in the air. But one would think the capitalist U.S. would by now understand that raw materials and resources usually reach the people who need to purchase them without a need by the latter to build great empires to control all concerned, a fruitless task. Peaceful commerce seems much underestimated in the Pentagon.

The U.S. is entering the new year, and a new age, still with a policy paradigm of aggression, war and global domination in the stubborn belief that the agency for accomplishing its security is to attack religious radicalism in other people’s countries, teach democracy to societies ill-equipped for it and fight nationalist resistance (other people’s nationalism, not America’s). The inevitable result will simply be more aggression, war, reciprocal terrorism, defeat and failure. This promises a far from happy new year!"
- http://www.truthdig.com/
•
Visit William Pfaff’s Web site for more on his latest book, “The Irony of Manifest Destiny: The Tragedy of America’s Foreign Policy”, at www.williampfaff.com.
Posted by CoyotePrime at 6:05 PM