"Which Comes First – Peak Everything or Peak Us?" 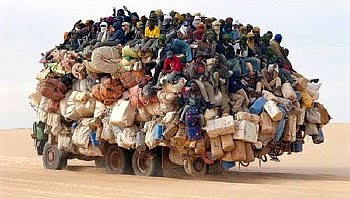 "Which Comes First – Peak Everything or Peak Us?"
By Andrew C. Revkin
"There are plentiful signs that the planet’s human population – after centuries of explosive growth — will crest within the next couple of generations. A mid-range best guess for the peak remains roughly 9 billion people. (As Gary Peters, one of my favorite commentators here, has pointed out on The Oil Drum, this is not necessarily a given.) There are even signs that resource-sapping activities will hit a peak, as well. Lee Schipper’s work on “peak travel” offers one glimpse.

But there are a host of unanswered questions about how the cresting of the centuries-long wave of growth in human numbers and appetites will play out. For instance, will resource limits (including the limited capacity of the atmosphere and oceans to provide a disposal site for human-generated greenhouse gases) impose population or economic declines? Or will the longstanding pattern of shifts in what we define as a resource, along with changes in technology and behavior, allow Homo sapiens to keep threading needles from one pinch point through another?

Another way to frame the question is to ponder evidence that we’re different than bacteria on agar. Through science, we are getting the growing impression that our petri dish has an edge. Do we grow unabated until fundamental resource constraints rein us in, or can we modulate behaviors to soften the transition to some steadier state?

Here’s one more framing, which I’ve used here before. We’re hardly the first life form to become a planetary powerhouse. Blue-green algae profoundly changed the composition of the atmosphere, adding the oxygen that today’s life forms rely on. But, as far as we know, those microorganisms weren’t aware of that achievement. Through science, humans are slowing becoming aware of planet-scale changes to ecosystems and the atmosphere with potentially enormous and long-lasting implications for climate and biology.

What evidence exists that people are capable of recognizing the edge of the petri dish and consciously shifting policies or individual aspirations and behaviors to smooth the transition? Some might point to the phaseout of ozone-destroying chlorofluorocarbons under the Montreal Protocol, others to China’s one-child policy or the spread of family planning initiatives in places as varied as Thailand and Iran. There’s the Endangered Species Act and the Clean Air Act, treaties and trade pacts aimed at conserving biological diversity, the moratorium on whale hunts. A countervailing example is the unabated rise in emissions of carbon dioxide. What’s your take on how things are likely to play out?"