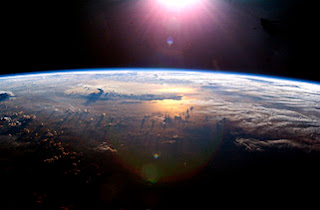 "7 Effects of Earth's Cosmic Shifts"
by Alan Boyle
"Over the course of thousands of years, Earth's axis wobbles like a top. Earth's cosmic shifts have had many effects. Just for luck, here are seven examples:
Changing pole star: An effect of Earth's wobbling axis is that different stars have served as the guide star for our planet's geographical north pole throughout history. During the heyday of the Egyptian pharaohs, for example, other stars took on the role of the pole star, an "undying" star that never set. This is thought to be the reason why the Great Pyramid of Khufu was built with a passageway that pointed to the star Thuban in the constellation Draco, which was the star closest to the north pole when Khufu died, around 2566 B.C. Later on, the pole stars were  Kochab and Pherkad in the constellation Ursa Minor. Today it's Polaris, but the bright star Vega had its turn around 12,000 B.C. and will be the pole star once again in the year 13,727 or so.

Changing magnetic poles: Last week's big geophysical story had to do with the gradual shift of Earth's magnetic north pole away from Canada and toward Russia. The poles move because of the changing flow of molten iron in Earth's core, which drives the planet's huge magnetic dynamo. This doesn't affect Earth's spin or geographical north, but it does cause the structure of the magnetic field to shift, which affects compasses. Although a lot of navigation nowadays is done using GPS systems, the Federal Aviation Administration wants to make sure that aviators can still find their way to a safe landing using magnetic compasses — and that's why it requires airports to revise their runway designations periodically to reflect the magnetic shift.

Shifting continents: Earth's continents are on the move as well, and over the course of millions of years, that has affected the course of evolution. "The continents are drifting at about the same rate that your fingernails are growing," Phil Plait, the astronomer who presides over the Bad Astronomy blog, told me. If you go back 180 million years or so, nearly all of Earth's land mass was united in one large continent called Pangea, which meant land-based organisms could spread far and wide. Since then, the continents have drifted apart, separating populations and leading to the rise of new species. The breakup of Pangea helps explain why kangaroos thrived in Australia but not America.

Uneven gravity: Just as Earth's magnetic field has its variations, so does Earth's gravitational field. Readings from the European Space Agency's GOCE satellite have plotted the subtle differences in our planet's mass distribution, on land and in the oceans. "You'd think gravity is the same everywhere, until you start delving really deep into it," said Alice Enevoldsen, planetarium supervisor at the Pacific Science Center in Seattle (and the blogger behind Alice's Astro Info). Variations in Earth's mass could help explain how ocean circulation works and lead to better climate prediction models.

Inconstant sun: Speaking of climate, the variations in solar irradiance play a significant role in the warming and cooling trends experienced on our planet as well as on others. Some suggest that the sun is a bigger factor than human industrial activity when it comes to global climate change. Most climate scientists say greenhouse-gas emissions have been playing a more significant role lately, but variations in the amount of solar radiation hitting the planet are definitely a factor as well. Last year, one study found that the amount of solar energy reaching Earth increased even though the sun was at the low point in its 11-year activity cycle. And just today, scientists reported that the solar energy levels were actually lower than previously thought.

Lengthening day: If it seems as if each day is longer than the last, you're right. But that's just because Earth is slowing down ever so slightly every day. Gravitational tugs from other celestial bodies (principally the moon and the sun) are causing the "great slowdown," as my colleague David Ropeik explained back in 2001. It's thought that when the moon formed, billions of years ago, a full day was six hours long, and that the day lasted less than 23 hours when dinosaurs ruled the earth. Nowadays, leap seconds are periodically added to keep atomic clocks in sync — most recently at the end of 2008.

Galactic tides: Our solar system's path through the Milky Way galaxy is subject to shifts as well. Scientists have noted that Earth's biodiversity seems to dip every 60 million years or so, at just about the time when the solar system bobs up through the average plane of the Milky Way's disk. Last month, researchers suggested that the rise through the galactic plane exposed the solar system to a surge of cosmic rays, dealing a damaging blow to life on Earth. Some scientists have also wondered whether the solar system's galactic oscillations might periodically send more comets into the solar system (killing off, let's say, the dinosaurs). This definitely sounds like a bad thing, and depending on who's doing the talking, we're either "very close" to the next risky period, or 10 million years away."
- http://cosmiclog.msnbc.msn.com
Posted by CoyotePrime at 3:50 PM