"Water on Moon Originated from Comets?"
by ScienceDaily
"Researchers at the University of Tennessee, Knoxville, continue to chip away at the mysterious existence of water on the moon - this time by discovering the origin of lunar water. Larry Taylor, a distinguished professor in the Department of Earth and Planetary Sciences, was the one last year to discover trace amounts of water on the moon. This discovery debunked beliefs held since the return of the first Apollo rocks that the moon was bone-dry. Then, he discovered water was actually pretty abundant and ubiquitous - enough so a human settlement on the moon is not unquestionable. 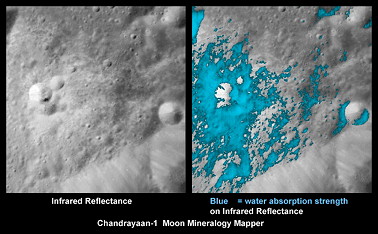 Now, Taylor and a team of researchers have determined the lunar water may have originated from comets smashing into the moon soon after it formed. His findings will be posted online, in the article "Extraterrestrial Hydrogen Isotope Composition of Water in Lunar Rocks" on the website of the scientific journal, "Nature Geoscience."
Taylor and his fellow researchers conducted their study by analyzing rocks brought back from the Apollo mission. Using secondary ion mass spectrometry, they measured the samples' "water signatures," which tell the possible origin of the water - and made the surprising discovery that the water on the Earth and moon are different. "This discovery forces us to go back to square one on the whole formation of the Earth and moon," said Taylor. "Before our research, we thought the Earth and moon had the same volatiles after the Giant Impact, just at greatly different quantities. Our work brings to light another component in the formation that we had not anticipated - comets."
Scientists believe the moon formed by a giant impact of the nascent Earth with a Mars-sized object called Theia, which caused a great explosion throwing materials outward to aggregate and create the moon. Taylor's article theorizes that at this time, there was a great flux of comets, or "dirty icebergs," hitting both the Earth and moon systems. The Earth already having lots of water and other volatiles did not change much. However, the moon, being bone-dry, acquired much of its water supply from these comets.
Taylor's research shows that water has been present throughout all of the moon's history - some water being supplied externally by solar winds and post-formation comets and the other internally during the moon's original formation. "The water we are looking at is internal," said Taylor. "It was put into the moon during its initial formation, where it existed like a melting pot in space, where cometary materials were added in at small yet significant amounts."
To be precise, the lunar water he has found does not consist of "water" - the molecule H2O - as we know it on Earth. Rather, it contains the ingredients for water - hydrogen and oxygen - that when the rocks are heated up, will be liberated to create water. The existence of hydrogen and oxygen - water - on the moon can literally serve as a launch pad for further space exploration. "This water could allow the moon to be a gas station in the sky," said Taylor. "Spaceships use up to 85 percent of their fuel getting away from Earth's gravity. This means the moon can act as a stepping stone to other planets. Missions can fuel up at the moon, with liquid hydrogen and liquid oxygen from the water, as they head into deeper space, to other places such as Mars."
- http://www.sciencedaily.com/
Posted by CoyotePrime at 2:55 PM