"Employment For Young American Men"
By Stuart Staniford
"I have a feeling that, looking back from the future, the year 2000 will look like "Peak America", or certainly "Peak Opportunity in America", with the last gasp of the Internet bubble. 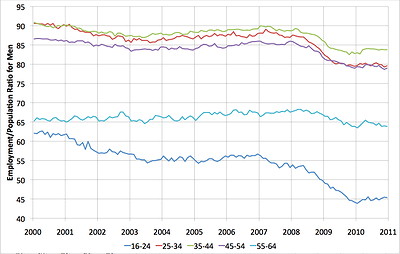 The graph above shows the employment-population ratio for men since then, broken out by age.  You can see that for all the groups below age 55, employment opportunities fell sharply between 2000 and about 2003, then recovered slightly until 2007 - but not to the 2000 level.  Then they fall sharply in the great recession and have pretty much barely improved at all since then. The one exception is the age group 55-64 who increased their participation through 2007, but we probably should see this is a sign of societal stress also - less ability for men to retire early.
However, the thing I wanted to highlight is the plight of younger men relative to those of us established in the workforce.  In 2000, employment was over 90% for both the 25-34 group and the 35-44 group - peak working years.  However, between then and now it's fallen by about seven percentage points for the 35-44s, but by eleven percentage points for the 25-34s. Meanwhile, men aged 16-24 have gone from 62% employment to only 45% - a 17 percentage point drop - more than a quarter of the men in this age group who might have been working under the conditions of 2000 are not under the conditions of today.

Those of us in generation X are apt to complain that we are having a harder time than the baby boom, but it looks like the generations behind us have it a good deal worse again. Of course, the way to make it look even more dismal is to focus on young black men - they are now down to only 1/3 of them working: 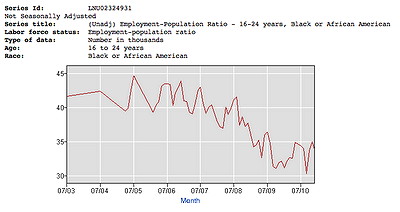 And, if asked to prognosticate, I would struggle to come up with a plausible story for how this is going to turn around.  With manufacturing jobs continuing to flee to Asia, construction in the doldrums for years to come, and more automation with each passing year, it seems more likely that the employment/population ratio will stagnate for a year, or three, or five, until the next shock/recession drives it lower still. America has traditionally been the Opportunity Society, but it sure is looking less and less that way."
- http://earlywarn.blogspot.com/
Posted by CoyotePrime at 3:56 AM