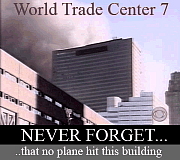 “Rumsfeld Feigns Dumb on Building 7”
By Sterling Allan
“Yesterday, Alex Jones had Erich " Mancow" Muller on his show to talk about an interview Muller had the day before (February 23) with Donald Rumsfeld, who was US Secretary of Defense during the attacks of 9/11.  Muller asked Rumsfeld what he says to people in response to the felling of World Trade Center, Building Seven, which wasn't hit by a plane, and the fires were almost out, yet it fell at freefall speed, in classical demolition manner; following buildings 1 and 2 on 9/11. Rumsfeld answered: "What is building 7?" ... "I have no idea. I have never heard that."

Muller, a mainstream who is awakening to the realities of 9/11 being an insider conspiracy, admitted to Alex Jones that this is a big stinking lie, as blatant as a wife laying in bed, caught with another man, saying, "what man?" yet there he is in bed with her.

Jones points out earlier in his show that Building 7 was hardly an inconsequential building to the defense apparatus.  It was a giant CIA command base, FBI base, NSA base, Defense Intelligence base. Almost the entire building, but a few floors, was government black ops.  The State Command Center, the Federal Command Center for a three state area was in there; Mayor Rudy Giuliani's bunker was there. And Rumsfeld said: "What is building 7?" ... "I have no idea. I have never heard that." That is such a blatant lie that no thinking person with a brain larger than a chicken could miss that fact.  It is prima facie evidence of his complicity in bringing that building down.

The Internet blogosphere is afire with this news; yet, as of this writing, no mainstream press picked up by Google News aggregation has covered it. Here is the video where Alex Jones interviews Mancow Muller.

Rumsfeld is the classic instance of the devil wearing a tie, having a smooth voice, appearing nice and friendly; yet in reality he is as wicked as they come when it comes to complicity in the destruction of modern society, trashing freedom and the Constitution. Here is more evidence that he belongs firmly in the list of top conspirators who should be brought to justice.  You can see why I listed him at ArrestConspirators.com. He is a Benedict Arnold and shouldn't be walking freely about the streets of the planet as if he truly is a nice guy."
- http://beforeitsnews.com/
•
"Who are you gonna believe, me or your own lying eyes?"
- Groucho Marx
Posted by CoyotePrime at 11:56 AM