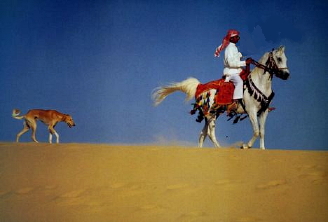 "Heaven and Hell"
by Paulo Coelho
"A man, his horse and his dog were traveling down a road. When they were passing by a gigantic tree, a bolt of lightning struck and they all fell dead on the spot. But the man did not realize that he had already left this world, so he went on walking with his two animals; sometimes the dead take time to understand their new condition…

The journey was very long, uphill, the sun was strong and they were covered in sweat and very thirsty. They were desperately in need of water. At a bend in the road they spotted a magnificent gateway, all in marble, which led to a square paved with blocks of gold and with a fountain in the center that spouted forth crystalline water. The traveler went up to the man guarding the gate.

“Good morning. What is this beautiful place?” “This is heaven.” “How good to have reached heaven, we’re ever so thirsty.” “You can come in and drink all you want.” “My horse and my dog are thirsty too.” “So sorry, but animals aren’t allowed in here.”

The man was very disappointed because his thirst was great, but he could not drink alone; he thanked the man and went on his way. After traveling a lot, they arrived exhausted at a farm whose entrance was marked with an old doorway that opened onto a tree-lined dirt road.

A man was lying down in the shadow of one of the trees, his head covered with a hat, perhaps asleep. “Good morning,” said the traveler. “We are very thirsty – me, my horse and my dog.” “There is a spring over in those stones,” said the man, pointing to the spot. “Drink as much as you like.” The man, the horse and the dog went to the spring and quenched their thirst. Then the traveler went back to thank the man.

“By the way, what’s this place called?” “Heaven.” “Heaven? But the guard at the marble gate back there said that was heaven!” “That’s not heaven, that’s hell.” The traveler was puzzled. “You’ve got to stop this! All this false information must cause enormous confusion!” The man smiled: “Not at all. As a matter of fact they do us a great favor. Because over there stay all those who are even capable of abandoning their best friends…”
- http://paulocoelhoblog.com/
Posted by CoyotePrime at 6:40 PM