“Budget Deficits and Foreign Policy”
by Addison Wiggin
“There are things that are “seen”… and those that are “not seen.” Seen: 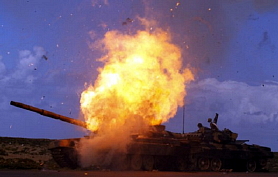 Saturday, on the eighth anniversary of the invasion of Iraq, the United States opened up a third front in the “Forever War.” US, British and French warplanes carried out air strikes to enforce a “no-fly zone” over Libya. When George H.W. Bush established a no-fly zone over parts of Iraq after the 1991 Gulf War, it was enforced with routine bombing for 12 years until his son ‘W’ sent in ground forces.

What, we ask with all the feigned interest we can muster, is the endgame in Libya? A cease-fire in their nascent civil war? “Regime change”? Oil exports diverted from their destinations in Europe and China…? Does it matter? “Circumstances will drive where this goes,” says Adm. Mike Mullen, chairman of the Joint Chiefs of Staff. And because “circumstances” have a funny way of getting out of hand, oil is again within a couple bucks of the high it set two weeks ago. Precious metals are reacting too. Gold is up to $1,431. Silver is a nickel away from $36.

Not seen: “With whopping budget deficits of more than $1 trillion per year, a national debt of more than $14 trillion, and the US military already overstretched by two drawn-out occupations,” muses foreign policy analyst Ivan Eland, “one would think some sort of ‘Vietnam Syndrome’ would have set in.” Not so. “Traditionally, the foreign policy elites of declining empires have never accepted the need to retrench overseas before it was too late.” And so it goes.”
- http://dailyreckoning.com/
Posted by CoyotePrime at 6:20 PM