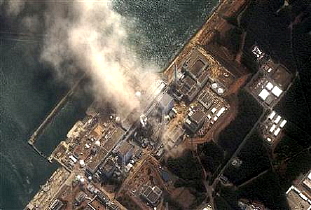 In contrast, distinguished nuclear expert Helen Caldicott called Fukushima an unprecedented "absolute disaster," multiples worse than Chernobyl. "The situation is very grim and not just for the Japanese people. If both reactors blow then the whole of the northern hemisphere may be affected. Only one (Chernobyl) reactor blew, and it was only three months old with relatively little radiation. (Fukushima's) have been operating for 40 years, and would hold about 30 times more radiation than Chernobyl." It killed nearly one million people and counting, according to the New York Academy of Sciences (NYAS). Yet the official IAEA figure was 4,000. NYAS' report said:

"This is a collection of papers translated from the Russian with some revised and updated contributions. Written by leading authorities from Eastern Europe, the volume outlines the history of the health and environmental consequences of the Chernobyl disaster. According to the authors, official discussions from the (IAEA) and associated (UN) agencies (e.g. the Chernobyl reports) have largely downplayed or ignored many of the findingins reported in the Eastern European scientific literature and consequently have erred by not including these assessments."

In fact, IAEA and UN agencies lied, what's ongoing now on Fukushima to conceal the greatest ever environmental/human disaster by far. Calling it a "diabolical catastrophe," Caldicott, in fact, believes "(i)t could be much, much worse than" 30 multiples of Chernobyl. "In the northern hemisphere, many millions could get cancer." Large parts of Japan may be permanently contaminated, not safe to live in. Adding a hopeful note, she also thinks "the nuclear industry is finished worldwide. I have said before, unfortunately, the only thing that is capable of stopping this wicked industry is a major catastrophe, and it now looks like this may be it."

In a March 16 "Destroyer of Worlds" statement, she added: "The world is now paying - and will pay however severe Fukushima turns out to be - a grave price for the nuclear industry's hubris and the arrogance and greed that fueled their drive to build more and more reactors. What's more, having bamboozled gullible politicians, the media, and much of the public into believing that it is a 'clean and green' solution to the problem of global warming, the nuclear industry has operated facilities improperly, with little or no regard for safety regulations, and they have often done this with the connivance of government authorities." In fact, nuclear power isn't "clean and green," nor is it safe or renewable. "It is instead 'a destroyer of worlds.' It is time the globaly community repudiated it....There is no other choice for the sake of future generations" and planet earth. Humanity has a choice - nuclear power or life itself.

On March 17, New York Times writers Norimitsu Onishi, David Sanger and Matthew Walf headlined, "With Quest to Cool Fuel Rods Stumbling, US Sees 'Weeks' of Struggle," saying: "America's "top nuclear official followed up his (day before) bleak appraisal of the grave situation at the plant, (cautioning) it would "take some time, possibly weeks" to make headway.

On March 17, Times writers David Sanger and William Broad headlined, "Radiation Spread Seen; Frantic Repairs Go On," saying: "...frantic efforts to cool nuclear fuel in the troubled reactors and in the plant's spent-fuel pools resulted in little or no progress, according to United States government officials."

Officials are also trying to restore power with no assurance doing so can help. Explosions, fires, and extremely high heat destroyed most or all plant equipment, likely including water pumps. An unnamed source said, "What you are seeing are desperate efforts - just throwing everything at it in hopes something will work. Right now this is more prayer than plan." More likely, however, it's deception, trying to convince public opinion that anything can work when, in fact, it may already be too late.

On March 18, Times writers David Sanger and William Broad headlined, "Frantic Repairs Go On at Plant; Little Progress in Cooling Fuel," saying: "Radioactive "(s)team was again rising over another part of the plant, this time billowing from Reactor No. 2" that exploded on Tuesday. No explanation why was given."

Helicopter water drops failed. On Friday, military officials halted them at least for a day. Nuclear experts think they're futile. Video evidence showed most water missed its target or evaporated before reaching it. Osaka University's Professor Akira Yamaguchi said: "7.5 tons of water has been dumped. We do not know the size of the pool, but judging from other examples it probably holds 2,000 tons. It does not mean the pool needs to be completely full, but maybe a third of the tank's capacity is needed."

Al Jazeera claimed "prevailing winds are likely to carry any contaminated smoke or steam away from the densely populated Tokyo area to dissipate over the Pacific Ocean. False! Radiation levels in Tokyo are dangerously high and rising. Moreover, a radiation cloud will reach California by weekend, then spread across most of North America. Downplaying the disaster's severity is scandalous and criminal. Besides dead zones and permanent environmental contamination, millions of illnesses and deaths are likely, though years will pass before accurate information is known.

Make no mistake, Japan's government/industry cabal bears full responsibility for the greatest ever environmental/human disaster, an indisputable crime. They have blood on their hands as does America, other governments, and "Destroyer of Worlds" officials that that proliferate this technology from hell. Nothing short of banning it is acceptable.
- http://www.rense.com/general93/muk.htm
Stephen Lendman lives in Chicago and can be reached at lendmanstephen@sbcglobal.net. Also visit his blog site at sjlendman.blogspot.com and listen to cutting-edge discussions with distinguished guests on the Progressive Radio News Hour on the Progressive Radio Network Thursdays at 10AM US Central time and Saturdays and Sundays at noon. All programs are archived for easy listening.
http://www.progressiveradionetwork.com/the-progressive-news-hour/.

Hat tip to Alex Noble for this material.
Posted by CoyotePrime at 10:45 PM