Nuclear Power: Dave Lindorff, “Hate to Say It, But We Told You So!” 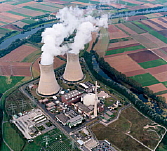 “Hate to Say It, But We Told You So!”
by Dave Lindorff
“It seems rather silly now, doesn’t it, all the US concern about terrorism?

The nuclear crisis in Japan, which continues to worsen, threatens to become a total multiple meltdown, combined with the perhaps even more disastrous explosion and fire in one or several spent fuel rod ponds. If any of these things happen, not to mention many of them, several hundred square miles of Japan would be rendered indefinitely uninhabitable, costing hundreds of billions of dollars. And it could be worse. If the winds are blowing south during such a disaster, all of Tokyo, which has a metropolitan population of over 30 million, could have to be evacuated.

A study by the US Nuclear Regulatory Commission back in 1997, found that one spent fuel disaster could devastate almost 200 square miles of the US, and cause half a trillion dollars in damage! And we’re spending hundreds of billions of dollars a year chasing after a few thousand ragtag Taliban fighters and supposedly pursuing a few hundred Arab terrorists, most of whom are fighting back with their shoes and their underwear?

So where is the real risk to America’s security? Well, for starters, we could consider the 23 nuclear plants currently operating in the US that were built by General Electric using the same basic flawed design as those that are blowing up in Fukushima, Japan right now. Those plants, which are located in my state of Pennsylvania, as well as everywhere from Alabama to Nebraska and Vermont, are as much as 40 years old. They are only still in operation today because the NRC is such an industry-captive regulator that it has granted them long license extensions running way past their sell-by date. It has even given many of them the okay to run at capacities exceeding 100% of design standards!

There are other plants, also creaky with age, such as the ones in San Onofre and Diablo Canyon, California, which were knowingly built within a few miles of major earthquake faults- faults which could produce earthquakes on a scale of the one that just hit Japan. Both those facilities were designed to allegedly be able to survive (when new) a 7.5 quake. That was an untestable assertion of faith, but in any case, with an 8, an 8.5 or a 9, all bets would be off.

San Onofre, by the way, is closer to Los Angeles than Fukushima is to Tokyo, so if there is a threat now that Tokyo might have to be evacuated, a similar blowup of the San Onofre nuke reactor would have the millions of people in Los Angeles evacuating their city- maybe back to Oklahoma where their forebears fled from the Dust Bowl (maybe we could call them LAkies, though hopefully they’d get a friendlier reception than L.A. gave to the okies of yore). So much for America’s only remaining export: the film industry.

It would make far more sense for the US to forget about those alleged terrorists who are supposedly out to get us (and to stop mucking around in the Middle East countries and provoking all that anger!) and instead to spend some of that Pentagon and Homeland Security swill to shut down these old nuke plants, and even many newer ones that are built in vulnerable locations, so we don’t have to suffer a disaster of our own making like the people of Japan are facing today.

Don’t expect much from our two nuke-besotted political parties, though.
Senate Minority leader Mitch McConnell, a man of stunningly limited intellectual ability who gives the impression when he talks of having just sucked on a lemon, weighed in with a defense of current government plans to subsidize and build more nuclear power plants in the US, saying that “right after a major environmental catastrophe” would “not be a very good time to be making American domestic policy.”

President Obama, is also backing a so-called “nuclear renaissance” in the US. A senior White House source has reportedly said that the president remains in favor of nuclear power and that U.S. nuclear plants were made to survive strong storms and earthquakes. And on Tuesday, as Japan pulled workers out of the Fukushima plant, essentially giving up the fight to prevent disaster because of the level of radioactivity there, the president told local Pittsburgh TV station KDKA that he had been assured that US reactors were safe (sic), closely monitored (sic), and designed to withstand earthquakes and other natural disasters (sic).

Of course, as Mother Jones magazine has noted, this same president, back in 2009, was touting the safety of Japanese nuclear plants as a model for the US. Back then, at a “town meeting” event, he said, “There's no reason why, technologically, we can't employ nuclear energy in a safe and effective way. Japan does it and France does it, and it doesn't have greenhouse gas emissions, so it would be stupid for us not to do that in a much more effective way."

Now, I admit it’s like shooting fish in a barrel to respond to these two shills for the nuclear industry, but what the hell, I’m going to fire anyhow.

And Mr. Obama, would you care to rephrase that 2009 line of yours in light of recent events? Perhaps it might be better to say, “Japan has shown what can happen with nuclear power when something goes wrong, so it would be stupid for us to continue to do here what they have done” and build nuclear plants all over the country on fault lines, near oceans and rivers, and near populations centers.

Watching all this go down is terribly frustrating. As my wife Joyce said yesterday morning, when we awoke to read of the looming threat of a full meltdown of perhaps as many as three or four reactors and the burning of one or more spent fuel piles in Japan, “We were right all along when we opposed nuclear power back in the 1970s.” Yes we were. Shouldn’t all us anti-nukers now get some street cred, some media respect, and some respect from the political class for our prescience? Nah. Don’t expect it. Money talks, and the nuclear establishment has the power- even if it is blowing up on them.”
- http://www.truth-out.org/hate-say-it-but-we-told-you-so68549
•
Hat tip to Alex Noble for this material.
Posted by CoyotePrime at 1:14 PM