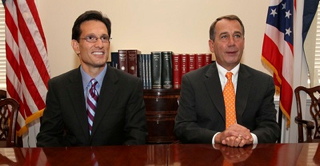 “Republicans:
Trillions Could Be Cut from Budget if We Eliminate Empathy”
Humanity Also on Chopping Block
by Andy Borowitz
WASHINGTON (The Borowitz Report) – "Speaking on behalf of congressional Republicans, House Majority Leader Eric Cantor (R-VA) said today that trillions could be cut from the Federal budget if Congress can agree to eliminate empathy. “The current budget is bursting at the seams with pet projects that reek of empathy,” Rep. Cantor said.  “As a nation, we can no longer afford to spend money on people’s basic survival needs like a bunch of drunken sailors.”

Rep. Cantor noted that “the word ‘empathy’ comes from the Greek word ‘pathos,’ meaning ‘pathetic’ – and that’s exactly what helping people is: pathetic.” “We Americans should get out of the habit of using Greek words,” he added.  “Look where it’s gotten the Greeks – straight into bankruptcy.”

Once congressional Republicans eliminate such empathy-laden budget items as lunches for poor children, medicine for the indigent and oxygen for seniors, Rep. Cantor said, “We can move from cutting empathy to cutting humanity.” With humanity removed from the budget, he said, “That’s where the real savings come in.” By eliminating the food, medicine and oxygen necessary to sustain human life, “We will reduce the single biggest drain on the U.S. economy: people.” Ending on an optimistic note, Rep. Cantor said that by eliminating people, “by the middle of this century the United States will be successfully transformed into one big unmanned Predator drone.”

Elsewhere, presidential candidate Rep. Michele Bachmann (R-Minn) today visited historic Monticello, which she called “the home of Jeffrey Dahmer.”
- http://www.borowitzreport.com
•
Sign up today for your own Borowitz Reports, click the link below
http://borowitzreport.us1.list-manage2.com/track/click?u=49de3335c30245ecd0fa291aa&id=7812b7ca28&e=9efef636fe