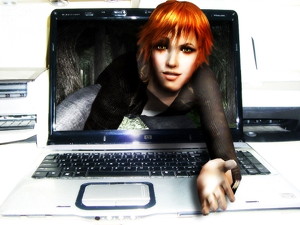 “Augmented Reality”
by Chet Raymo
“’THE WORLD WLL NEVER LOOK THE SAME AGAIN’, shouts the headline in the Tech & Net section of the London Sunday Times. Then, slightly more subdued: "Augmented reality glasses take what you see and add what you want to see. Mark Harris has an exclusive trial - and can't believe his eyes." Apparently, these nifty new sunglasses have beamsplitters in the lenses that superimpose whatever you want on what you are seeing - Facebook info, tweets, shopping and dining options, GPS navigation, and so on. You can even engage in murderous gunplay with monsters that leap right out of your familiar neighborhood environment. Augmented reality! And I'm still learning to see the plain old unaugmented reality that's right in front of my eyes.

Annie Dillard suggested that nature is like one of those line drawings of a tree that are puzzles for children: Can you find hidden in the leaves a duck, a house, a boy, a bucket, a zebra, and a boot? I've always liked that image. I'm 74 years old and I'm still looking for the bucket and the boot. And lots more. Just walking down the lane here in Ireland is a challenge for my eyes. The black beetle. The slug. The tiny blossoms of the herb Robert. The kestrel away up there on the hill. I don't need augmented reality gasses. I just need knowledge and love. I just need to pay attention.

I'm still trying to see the shape of the Earth. I mean really see it, the great curving globe. I walk on Ventry Strand and see the island of Skellig Michael poking its nose up out of the Atlantic and I remember that the nose is a little bit longer when viewed from my house on the hill. I almost can feel the Earth arcing away from me down toward the Azores.

I'm still trying to see the shape of night, that skinny cone of darkness pointing away from the Sun. "I spin beneath my pyramid of night," speaks the Earth in Shelley's “Prometheus Unbound.” Shelley saw the shape of night, saw it in his mind's eye. I've barely glimpsed it during lunar eclipses when the Earth's round shadow slips across the Moon's bright face.

Augmented reality! Lordy, yes. I'd love to have augmented perception. But it won't come by being flashed on my beamsplitted visual field by some electronic gizmo in my pocket. It will come - if I'm lucky - with all the stealth of a wren in the hedge. It will come when I see the evening Sun break the clouds over Croughmaurin and turn around to find a rainbow arching from Caherard hill to Ventry Harbor. The 19th-century ornithologist Frank Chapman wrote of the plover: "One may ride over a prairie upon which, at first glance, not a plover is visible, and find, after careful scrutiny, that dozens of birds are scattered about." That's the kind of augmented reality I'm looking for.”
- http://blog.sciencemusings.com/
Posted by CoyotePrime at 9:37 PM