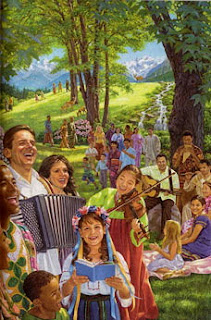 “An Earthly Paradise?”
by Chet Raymo
“A few lines from a poem, "Ode to Entropy", by John Updike:
․
'Death exists nowhere in nature, not
in the minds of birds or the consciousness of flowers,
not even in the numb brain of the wildebeest calf
gone under to the grinning crocodile, nowhere
in the mesh of woods or the tons of the sea, only
in our forebodings...'
As far as we know, no other creature, animal or plant, has an awareness of self-mortality. Only in human consciousness is death anticipated, as a dark foreboding, or promise of release. So much is carried along in the baggage of anticipation. Courage. Fear. Virtue. Sin.

In the R.C. theology of my youth only humans had immortal souls. In the Heaven of our imaginations there were no animals or plants. Or, for that matter, no Sun, Moon, stars or weather. No dawns or dusks. No seasons. As a kid, I pictured Heaven as a hospital sort of place, all stainless steel and pale green gowns and white paint and angels with push-carts and mops going around swabbing up all the invisible microbes that managed to slip in on our resurrected feet, and some little device going ping-ping-ping over the intercom counting off the seconds of eternity.

Not a terribly attractive prospect. The funny thing is, nothing more attractive has come along to take its place; that is to say, as hard as I try I cannot conjure up any notion of immortality that meets the loosest criterion of plausibility. But a morning last week came close. It had rained all night, stopping just before I set out for the college at sunrise. The leaves that carpeted the floor of the woods glistened wet. A summery golden light filtered through the mist transmuting every surface with a Midas touch. Soft. And silent, except for the tap-tap-tap of a downy woodpecker. And for about a microsecond I might have imagined...

No, never mind. Ray Kurzweil, age 63, wants to live long enough to live forever; that is, to hang in until science solves the riddle of aging and gives us immortality on Earth, assuming, of course, that we don't get knocked down in the street by a bus or blow ourselves up in some intrahuman squabble. Not me. I'll settle a few more of those microseconds when the here and now seems more desirable than the aseptic, creatureless hospital-in-the-sky or the long, drawn-out forebodings of a Kurzweilian future.”
- http://blog.sciencemusings.com/2009_11_01_archive.html
Posted by CoyotePrime at 7:18 PM