Chet Raymo, “Humility In the Face of Complexity” 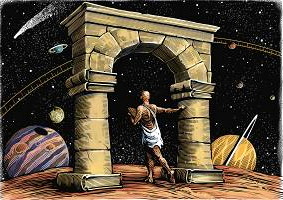 “Humility In the Face of Complexity”
by Chet Raymo
“In the September, 2009 issue of Harper's Magazine, contributing editor Mark Slouka has an essay titled "Dehumanized: When Math and Science Rule the School." The title and subtitle say it all. Education in America today is all about preparing Americans to compete in the global marketplace, says Slouka, all about inflating the nation's GNP. Math and science are key to making our kids competitive. He quotes everyone from Bill Gates to Thomas Friedman on the need for job related skills. What is taught in the schools at any given time, in any culture, is an expression of what that culture considers important, says Slouka, and in our time, in our place, the reigning orthodoxy is economic. The humanities are shunted aside.

Slouka is wrong on two counts, but before I get to that, let me quote his ringing defense of the humanities, which strikes me as right on the mark:
" The humanities teach us, incrementally, endlessly, not what to do but how to be. Their method is confrontational, their domain unlimited, their "product" not truth but the reasoned search for truth... They complicate our vision, pull our most cherished notions out by the roots, flay our priorities. Because they grow uncertainty. Because they expand the reach of our understanding (and therefore our compassion), even as they force us to draw and redraw the borders of tolerance. Because out of all this work of self-building might emerge an individual capable of humility in the face of complexity; an individual formed through questioning and therefore unlikely to cede that right; an individual resistant to coercion, to manipulation and demagoguery in all their forms. The humanities, in short, are a superb mechanism for what we might call democratic values.”

Second, in my book, math and science are a necessary part of a liberal education, and can contribute mightily to achieving the kind of humane, democratic values Slouka outlines above. I always taught math and science as "humanities," as part of the necessary intellectual equipment any educated person can profitably use to navigate the world - because they grow uncertainty, because they expand the reach of our understanding. Let's not forget that arithmetic, geometry and astronomy were among the seven liberal arts of the medieval European university.

By all means, let's have grammar, rhetoric, logic and music (the other four "liberal arts"). And art, literature, and history. But know, too, that math and science teach the values of axiomatic reasoning and institutionalized skepticism, of consensus building and civil discourse, and of the open-ended search for truth.

Slouka says: "To put it simply, science addresses the outer world; the humanities, the inner one. Science explains how the material world is now for all men; the humanities, in their indirect, slippery way, offer raw materials from which the individual constructs a self - a self distinct from others." Well, yes. And the point of a liberal education, I would maintain, is to find a balance between the subjective inner world of the individual and the objective outer world we all share. Too often there is a disconnect that leads to nothing but mischief.”
- http://blog.sciencemusings.com/2009_09_01_archive.html
Posted by CoyotePrime at 7:19 PM