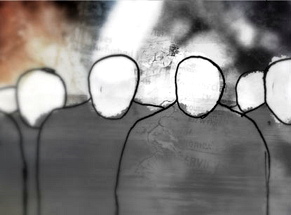 "Automaton Conformity"
by Erich Fromm
"In the mechanisms we have been discussing, the individual overcomes the feeling of insignificance in comparison with the overwhelming power of the world outside himself either by renouncing his individual integrity, or by destroying others so that the world ceases to be threatening. Other mechanisms of escape are the withdrawal from the world so completely that it loses its threat (the picture we find in certain psychotic states), and the inflation of oneself psychologically to such an extent that the world outside becomes small in comparison. Although these mechanisms of escape are important for individual psychology, they are only of minor relevance culturally. I shall not, therefore, discuss them further here, but instead will turn to another mechanism of escape which is of the greatest social significance.

This particular mechanism is the solution that the majority of normal individuals find in modern society. To put it briefly, the individual ceases to be himself; he adopts entirely the kind of personality offered to him by cultural patterns; and he therefore becomes exactly as all others are and as they expect him to be. The discrepancy between "I" and the world disappears and with it the conscious fear of aloneness and powerlessness. This mechanism can be compared with the protective coloring some animals assume. They look so similar to their surroundings that they are hardly distinguishable from them. The person who gives up his individual self and becomes an automaton, identical with millions of other automatons around him, need not feel alone and anxious any more. But the price he pays, however, is high; it is the loss of his self."
- Erich Fromm, "Fear of Freedom"
Posted by CoyotePrime at 8:34 PM