“The Fort Calhoun Nuclear Power Plant:
Fukushima in Nebraska?”
Raging Flood Waters Threaten Nuclear Catastrophe
by Kurt Nimmo
"Once again, the corporate media is ignoring a potentially deadly nuclear situation, this time right here in the United States. The Fort Calhoun Nuclear Power Plant in Nebraska is now inundated with flood water from the Missouri River. A berm protecting the plant collapsed on Sunday. Prior to the failure of the berm, there was a fire at the facility. The official story was that the fire was contained in an electrical switchgear room. The plant serves as the storage site for 20 years worth of spent fuel rods from plants in the state in addition to one third of the rods that were removed during a recent refueling. In 2006, the site began storing spent fuel rods above ground in mausoleum-like concrete structures outside the nuclear plant. Omaha Public Power says the spent fuels rods will be stored on-site forever. In addition, in 2009, the Fort Calhoun Nuclear Power Plant was considered an alternative fuel rod storage site to Yucca Mountain in Nevada. In 2010, Congress failed to fund Yucca Mountain after more than $9 billion was squandered building concrete tunnels and chambers designed to keep waste safe for at least a million years

Gates did not address the very distinct possibility that the plant may soon be completely overwhelmed by water from the Missouri River. Due to an unprecedented amount of flood water, the failure of an upstream dam at Fort Peck Dam could lead to a domino-like collapse of five earthen downstream dams, swamp the nuclear power plant, and knock out the generators now used to cool the fuel rods. “The Fort Peck Dam is built with a flawed design that has suffered a well-known fate for this type of dam — liquefaction — in which saturated soil loses its stability,” Bernard Shanks wrote on June 7. “Hydraulic-fill dams are prone to almost instant collapse from stress or earthquakes. California required all hydraulic-fill dams be torn out or rebuilt — and no other large dams have been built this way since.”

Can we trust nuclear power officials to tell us the truth? The Fukushima disaster was worsened considerably by the cover-ups and lies of government and industry officials. Should we expect the same here in the United States?
- http://beforeitsnews.com/
•
"Ft. Calhoun Equals About 20 Fukushimas"
by Zen Gardner
“MSNBC apparently had a picture of the Ft. Calhoun nuclear plant taken today AFTER the 'water dam' - barely visible surrounding the reactor and main control buildings in this photo taken on June 24 - burst. But that page is now 'page not found'. I'll guess that when the aqua dam burst, the control room was flooded. They are saying "no problem, there is no danger"- but, of course, there IS a problem.

The REASON there is a problem and why they aren't telling the truth is because, while Fukishima is equivalent to about twenty Chernobyls, Ft. Calhoun is equivalent to about twenty Fukushimas. Not because it has a lot of reactors - or even a very big one. But because it is holding an immense amount of nuclear fuel in its cooling pool. This isn't some elevated bathtub like the cooling pools at Fukushima. Oh, no. This cooling pool is forty feet UNDER GROUND AND forty feet ABOVE GROUND. It's EIGHTY FEET DEEP IN TOTAL. If they can't cool it, the corn belt is in trouble. 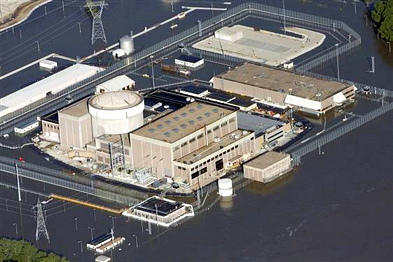 I'm guessing that it's the big rectangular building behind-left (actually touching) the round nuclear reactor containment building. Why do I think that? Because it has no windows or ventilation and it's about the only building on-site large enough to hold the amount of spent nuclear fuel it has to hold - and, by the way, it was filled up to capacity in 2006 - which is why they had to start storing the excess spent fuel rods in those concrete dry casks outside of the pool. But I could be wrong. If I am, please send me a diagram - not an opiniongram. The dry casks are visible near the top of the picture. They are grey concrete blocks set together on the large, grey square area. The casks have white doors facing a little to the left in the photo. The NRC says there is 'no problem' should the casks become partially submerged by Missouri flood waters.

The back-up generators are probably flooded as well. They were ALSO what the rubber dam was in place to protect. Even if they aren't, there is water in the electrical system. That's what the yellow cards from the NRC were about last year - and those cards were never signed off as safe. There are at least six and probably dozens of NRC and government people there 'closely monitoring' the plant. All they can do is watch. The 'emergency' plans were only thought up when the water started rising and were only implemented beginning on June 6. Before then, the plant owners were still pissing back and forth with the NRC that a flood that bad couldn't happen. And the brilliant rubber condom around the plant didn't just burst by itself. The dumbasses were piddling around and managed to pop it themselves!

So, when they tell me there is no danger at all, I know otherwise because the rubber dam was the last resort...and that ANY water higher than that is too much - and the water was clearly VERY high up on it when it burst. I'm thinking that if I call another disaster, and it happens, it will start getting dicey in about sixty-four hours. From now.”
- http://beforeitsnews.com/
http://www.rense.com/general94/newst.htm
Posted by CoyotePrime at 6:30 PM