"Ft. Calhoun: A Nightmare Scenario?"
by Zen Gardner
"We better be thinking ahead at this point. If it's not outright sabotoge going on in Nebraska it might as well be. The news blackout and no-fly zone and usual downplaying assurances tell you all you need to know anyway. If Calhoun melts down the contamination will be catastrophic, estimated by some to potentially be as much as 20 Fukushimas due to all the fuel rods being stored there. Smart. But this time there's no ocean to cross. 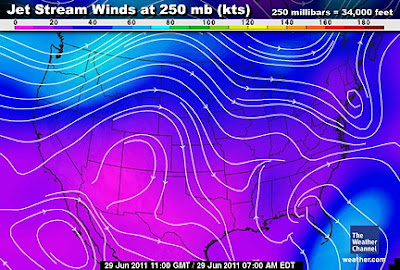 And Who's Downwind? According to today's jet stream report, Kansas, Iowa, Missouri, Illinois, Ohio, Pennsylvania and right on through the New York megalopolis and all of New England...with the gulf stream drawing it down the eastern seaboard all the way through Florida and the Gulf of Mexico. That will include direct hits on the heavily populated metro areas of St. Louis, Chicago, Detroit, Cleveland, Philadelphia, New York and DC. We also know that the gulf stream moves around-naturally, and unnaturally thanks to HAARP weather manipulation technology. Doesn't that give you peace. And then downstream? The contaminated flood waters would devastate everything in its path, including all the states, fisheries and farmland along the Missouri and Mississippi rivers and on into the Gulf of Mexico. I know, it sucks.
The Perfect Storm: And this didn't cross 5000 miles of open ocean first. This would be a direct hit. One can't begin to estimate the amount of life of all forms that would be contaminated if such a disaster were to occur. On top of this, this is America's breadbasket getting flooded, tornadoed and nuked. The repercussions are inestimable. All we need now is for the New Madrid Fault to go. It's almost beyond belief. And unfortunately this where most people are going to file all this... beyond belief, much like the Gulf disaster, the major earthquakes and tsunamis, and Fukushima. As long as the media don't let their guard down and react with genuine concern or outrage, most of the populace will opt to think everything's OK.

Don't Just Sit There: We recently moved from an area we considered dangerous and are planning further moves. We've changed our lives so that we can uproot from just about anywhere at a moment's notice if need be, and advise others to consider doing the same. That, or batten down the hatches with proper protection and supplies. (Potassium iodide should be administered with caution and research-other good supplements and cleanses are available on natural medicine sites.) Alarmist? You bet. Someone better sound the alarm...the powers that be sure won't. Be prepared.”
- http://www.zengardner.com/
http://beforeitsnews.com/story/759/546/Ft._Calhoun:_A_Nightmare_Scenario.html
∙
What's this all about? See this post:
http://coyoteprime-runningcauseicantfly.blogspot.com/2011/06/fort-calhoun-nuclear-power-plant.html
•
A comment: This is being posted to inform, not alarm you. What's sad about the whole thing is that we know very well that the main stream media liars and propaganda artists will never tell us the truth, so we have to find it wherever we can. I can't verify this story. I don't live there and have no first hand knowledge of what's actually happening, but if what this author says is true then it's extremely important, don't you think? It's something we all have a right to know, and to do whatever we can to protect ourselves. In these days and times this is the best we can do. Isn't that pathetic? - CP
Posted by CoyotePrime at 10:49 AM