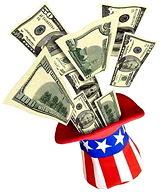 “Debt ‘Deal’? The Fundamental Mathematics Of Failure”
by Karl Denninger
“So crows Bloomberg this morning: ‘President Barack Obama and Republicans are narrowing the debate on a deficit-cutting plan to a reduction of $1 trillion to $2 trillion, though whether that would settle the issue through the 2012 presidential election remains in doubt, according to budget and debt experts. White House press secretary Jay Carney insisted yesterday that a “significant” deal is still possible, even as Republicans and Democrats show little signs of compromise on entitlements and taxes, and Republicans remain firm in their demand for spending cuts in excess of the debt-limit increase.’

Now let's take just one second and look at what all this means.  Take Excel, open it, and enter the following:

First column, 14, second 53, third (=B1*.04) and fourth (=C1/A1).  Set the last column to display a percentage. The first column is GDP (trillions), the second (total systemic) debt in trillions.  Both are factual figures from the Fed's Z1 and the BEA's GDP series. The third is a guessed blended interest rate on that debt (rather conservative and probably too low by at least a percent or two) and the forth is the percentage of GDP that must be spent on debt service.

Notice that the percentage of debt service (in terms of GDP) increases every single year. Now I want you to take the 100 years of data and insert a graph on the first three columns.

It looks like this: The absurdity of believing that the United States can have $60,000 trillion (that's 60 quadrillion) of debt outstanding in 100 years is, well, beyond stupid.  That's more than one thousand times as much debt as is outstanding right now. But the real "you're screwed" is in the two bottom curves and is hard to see.  Let's remove the debt number and make it easier, reducing it to just the first 60 years (you know, by 2070?)

By the way, it's not possible to pay more than 100% of GDP in debt service, since there is only 100% to pay with.  Further, you can't pay 100%, since there are other things you need to buy, like for instance food, fuel, housing, etc.

If you don't believe this is inevitable so long as deficits continue to be present in the economy, irrespective of the interest rate, go ahead and play with the spreadsheet.  Set the interest rate to any positive number and choose a GDP growth rate of your choice.  So long as the total systemic debt growth rate is larger than the GDP growth rate this outcome will always occur, with the only question being "how long before it does?"  The same, incidentally, is true so long as the government's debt growth rate exceeds that of GDP - any government that maintains such a policy will eventually blow up.

This is the fundamental characteristic of exponents - any two compound (exponential) functions where one is larger than the other will always run away from one another.  If one must service (at some percentage over zero) the larger function with the smaller bankruptcy is inevitable if you maintain the compounding of the debt (the larger.)

Since nobody ever intentionally loans out capital at a loss debt will always grow faster than GDP in a free market economy during economic expansion.  The practice of increasing government deficits to "mitigate" recession is simply an attempt to prevent the fundamental mathematics from asserting themselves and blowing up those who lent out too much money to people who can't pay from going under.  That process, called "creative destruction", detonates both the imprudent borrowers and the lenders who lent them the money.  That process is necessary in order to clear the economy of excessive debt and halt the compounding of economic damage!

It is not mathematically possible to prevent the contraction that must come; one can only defer the damage, and that deferral must mathematically result in further compounding of the ultimate pain that must be accepted and worked through the economy! You cannot change fundamental mathematical FACTS.

Today our government is borrowing and spending about 12% of GDP.  If the government stops doing that then GDP must contract by (at least) that same 12%.  If the government raises taxes instead then the same contraction occurs since the tax revenues must come out of your pocket, and you can't spend money that is taxed away.

GDP is defined as "GDP = C + I + G + (x - i)", where "C" is consumption, "I" is net investment, "G" is government spending, "x" is exports and "i" is imports.  Again, arithmetic - not complex mathematics, arithmetic.  Reduce either "G" (government spending) or some combination of "C" and "I" (increase taxes) and GDP contracts by the same amount.  Period.

It really is this simple folks.  We have played this game for thirty years and in fact have not had a single positive quarter where GDP has increased greater than total systemic debt since 1980. (Rate of GDP increase compared to debt increase; numbers over "0" are positive economic growth adjusted for total systemic debt, under "0" are internal economic deterioration as debt is increasing faster than output.)

All the last three years (and the deficits from 2001-2007, incidentally) have done is attempt to paper over the rot that both Democrat and Republican have foisted off on the economy in every single quarter since 1980.  Most of Congress and their staff appear to be ignorant of these fundamental facts of arithmetic - not out of stupidity, but simply because they don't understand it and nobody has ever explained it and challenged them to go verify these basic mathematical relationships for themselves.

Ben Bernanke, Jamie Dimon and the rest of the banksters certainly do understand these fundamental facts, and the former, at least, has an absolute duty to bring this up in public with Congress. It is very apparent that he has failed to do so, and that the entire banking industry is using Congressional (and Presidential) ignorance of these facts to pilfer the Public Treasury - and the private economy. Nonetheless it is impossible for this strategy to succeed for the broader economy.  All this strategy can do is allow more plunder of the economy - for a little while - by the banksters.

We must stop this madness, right here and now, despite the fact that doing so will cause great and immediate economic pain.  That means no more government debt and it means accepting both the bankruptcy of those lenders and borrowers who are over-levered and the corresponding economic contraction that must, mathematically, come with this adjustment. There is no alternative; the longer this charade continues the worse the compounded damage.”
- http://market-ticker.org/
Posted by CoyotePrime at 10:46 AM