Physics: "What's Going On With the Sun?"

"What's Going On With the Sun?"
by Physics World
"Earlier this month a lot of column inches were devoted to the news that the Sun continues to behave in a peculiar manner - and that solar activity could be about to enter a period of extended calm. The story emerged after three groups of researchers presented independent studies at the annual meeting of the Solar Physics Division of the American Astronomical Society, which appear to support this theory. But are the new findings really that clear-cut and what implications do they have for the climate here on Earth? Physicsworld.com addresses some of the issues. 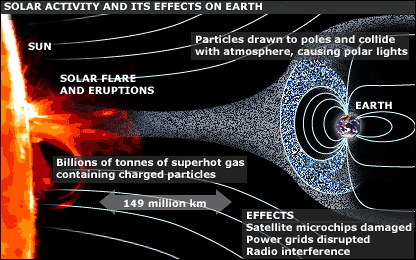 Why the recent interest in the Sun's activities? Solar physicists agree that the Sun has been acting strangely of late. It relates to apparent abnormalities in the solar cycle, an approximately 11-year period during which the Sun's magnetic activity oscillates from low strength to high strength, then back again. When the Sun's magnetic activity is low, during a solar minimum, its surface remains relatively quiet, which leads to fewer sunspots. Then, as magnetic activity begins to increase, the surface becomes more dynamic and the sunspot numbers begin to increase in the lead up to a solar maximum.

But following the last solar minimum in 2006, solar physicists were surprised to observe that sunspot numbers were unusually slow to pick up. This led some to suggest that the next solar maximum, due in 2013, could be late and weaker than usual. Some see this as a sign that solar magnetic activity is slowing down and the Sun may be about to head into a prolonged period of magnetic weakness. Some have speculated that a weakened Sun could offset some of the effects of man-made global warming, or even counteract it entirely.

What was presented at the recent AAS meeting in New Mexico? In one paper, Frank Hill of the National Solar Observatory (NSO) and his colleagues argue that because a specific solar wind beneath the surface of the Sun has failed to appear during the present solar cycle it could signify that the next cycle will be delayed. Hill and his colleagues identified the wind flow - known as "torsional oscillation" - using data from the Global Oscillation Network Group (GONG). They believe that the migration of this flow from mid-latitudes to the equator is a precursor to new sunspot formation in each cycle. Because the wind is yet to appear during the present cycle, the researchers argue that the next cycle could be postponed to 2021 or 2022, or it may not happen at all.

In a second paper, Richard Altrock of the US Air Force Research Laboratory describes how a process known as the "rush to the poles" appears to be slowing down. This phenomenon describes how older magnetic activity is pushed to higher latitudes during new cycles as fresh magnetic activity emerges at about 70 degrees latitude. Altrock has observed, using data from NSO's 40-cm coronagraphic telescope, that this rush has been more like a crawl during the present cycle. For this reason, he believes that we'll see a very weak solar maximum in 2013 and if the rush to the poles fails to complete then it is not clear how the sun will respond.

In a final paper, Matt Penn and William Livingston of the National Solar Observatory, in Tucson, look more specifically at the nature of sunspots during the two most recent cycles. The magnetic field associated with sunspots is typically 2500 - 3500 Gauss, but Penn and Livingston believe that the field strength has been reducing of late. Using over 13 years of data collected at the McMath-Pierce Telescope at Kitt Peak in Arizona, the researchers found that the average field strength dropped by roughly 50 Gauss per year during the previous cycle and the trend has continued into the present one.

Has the Sun gone through quiet spells before? Scientists have known about the solar cycle since the mid 18th century and they have been able to reconstruct solar cycles back to the beginning of the 17th century based on historic observations of sunspot numbers. (Some researchers have even attempted to catalogue earlier solar cycles based on indirect observations of Sun spots). The first thing to say is that although solar activity has consistently oscillated over an approximately 11-year period, the timings and characteristics of each cycle are far from exact and new cycles have been late on arrival in the past.

Solar physicists do agree, however, that there was a 70-year stretch beginning in 1645 when the Sun remained in an extended period of calm referred to as the Maunder minimum. This period coincided with the "Little Ice Age" during which parts of the world including Europe and North America, experienced colder winters and increased glaciation. There was another shorter minimum from about 1790 to 1830, known as the Dalton Minimum. What role did the Maunder minimum play in the Little Ice Age?
So could we be heading for another Little Ice Age?

There are many uncertainties surrounding this question. Firstly, as explained in the previous answer, it is far from clear whether the Sun is headed for another period of calm. Recent research in the UK, predicts an 8% chance that we will return to Maunder minimum conditions over the next 40 years, based on past behaviour of the Sun over the last 9000 years.

Secondly, there are still debates over the details of the Little Ice Age and the role played by the Maunder minimum. In Europe, there were considerably more cold winters in this interval, but they were not unrelentingly cold as they were in an ice age. Also, the Earth's climate is evidently a highly complicated system, involving interconnected feedback systems, so it is difficult to disentangle causes and effects. For instance, several recent studies have suggested that solar-induced changes to the jet stream in the northern hemisphere may cause colder winters in Europe but this would be offset by milder winters in Greenland.

Finally, even if the Sun were to head into a quiet period, others argue that the reduction in solar irradiance on Earth would still be small compared with the heating caused by man-made global warming. Mike Lockwood, a researcher at the University of Reading, estimates that the change in climate radiative forcing since the Maunder minimum is about one tenth of the change caused by man-made trace greenhouse gases.”
- http://www.sott.net/
Posted by CoyotePrime at 12:58 PM