“Third World America: Drowning in Debt and Choking on Lies” 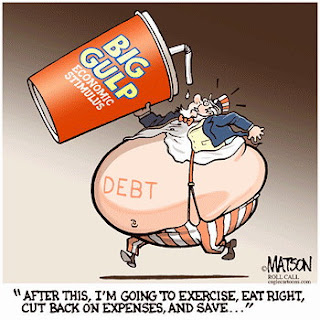 “Third World America:
Drowning in Debt and Choking on Lies”
by Janet Tavakoli
“If a drunk driver crashed his speeding rental car into your house and killed your spouse, you would be outraged if law enforcers took bribes and refused to give the driver a blood test. If the judge then gave the killer a small fine and ordered you to pay the fine and pay for all the damages, you'd be outraged. If the government then handed the drunk-driver keys to a bigger faster rental car, handed the drunk driver an even bigger bottle of whiskey, and then gave you the rental bill; you'd storm Washington, blizzard elected officials with protests and organize friends and associates to vote these malefactors, the elected officials that betrayed your trust, out of office.

Yet, we've remained largely silent in the face of the same sort of behavior by Wall Street and Washington. Bonus-seeking bankers crashed into Main Street's economy and ran control frauds within banks that would have failed without taxpayer bailouts. Bureaucrats and elected officials bailed them out without demanding consequences. Bankers are revving their engines again in credit derivatives, currency derivatives, and commodities trades. "Financial reform" addresses none of the latter problems.

Arianna Huffington's "Third World America: How Our Politicians are Abandoning the Middle Class and Betraying the American Dream" explains that the $787 billion American Recovery and Reinvestment Act, the bank bailout package also known as TARP, allotted only $72 billion to infrastructure projects. Another feature of the bill was to have banks agree to lend money to medium and small sized businesses to stimulate the economy. That didn't happen and official unemployment numbers remain above 9%, while unofficial figures for underemployed Americans soar above 20%.

The number one stimulus for any economy is not consumer spending, although that is a powerful secondary effect. The number one stimulus is capital spending, investment in the production of real goods and consumables. As Third World America explains: "There were three flaws with the old economy that has crashed. It favored consumption over production, debt over small savings, and environmental damage over environmental renewal."

Our ongoing bank bailouts included the mispricing of around $4 trillion of toxic assets that the banks cannot afford to honestly price, since bank capital would be wiped out sparking another global financial meltdown. We continue to provide cheap taxpayer funding through the Fed. New accounting rules allow banks to cover-up the low price of impaired assets, and government debt guarantees provide ongoing subsidies to banks that have a value of trillions of dollars.

Ground Zero for America's Debt Crisis: Beyond the banks, we have fiscal mismanagement and corruption that plagues middle class taxpayers. I happen to live in Illinois, the best example of this in the nation. Cook County encompasses Chicago and some of its surrounding suburbs. This week, the Cook County Treasurer discovered "stunning" debt. This debt isn't new, but apparently our officials are now properly terrified. Our total debt for the municipality, education, county, sanitary, park, fire, township, library and special services is now $108 billion. That means the debt per person in Chicago exceeds $23,700 (corrected assuming 2.67 average per household) or more than $63,500 per household, and that is just local debt.

The other problem is that the Illinois economy isn't growing. Many of those households have no income coming in other than government subsidies, and some have no income at all. Unofficial unemployment numbers top 20%. State of Illinois taxes increased from 3% to 5%, an increase of around 67%. Taxes on real estate, utilities, sales, and more are expected to skyrocket. Businesses like the Chicago Mercantile Exchange are being courted by low income tax states (at least the income taxes are currently low) like Florida.

David Walker, the former U.S. comptroller general, says it's even worse than that. When he takes into account future obligations for Medicare, Social Security, Federal debt, Military retirement, Civil servant retirement, and more, we owe $546,663 per household. That doesn't even include your local debt - it may not be as bad as if you lived in Illinois, but it's substantial nonetheless - and personal debt including mortgages and consumer debt that average more than $120,000 per household.

We're told we are a great country and we can "grow our way out of it." Exactly how does that occur, when jobs are going overseas, taxes for the wealthiest in our country are uncollectible after exploiting tax breaks, and programs for investment in infrastructure and production are virtually nonexistent? America's biggest problem by far is that capital spending in new production facilities that create jobs and real products never occurred, not even after trillions of dollars were thrown at banks in the global financial system."
- http://www.huffingtonpost.com/
Posted by CoyotePrime at 10:59 AM