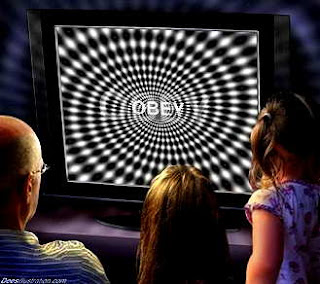 "Silent Sound Spread Spectrum (SSSS) And
HDTV Broadcast Signal: Connection?"
by Gary Rea
"Ever since first hearing of it I’ve had a deepening sense of foreboding – an unnamed dread of the shift to an all-digital television broadcast signal, implemented in February 2009. Now, I believe, that nameless dread may have a name, after all. The Department of Defense calls it Silent Sound Spread Spectrum (SSSS), and it also goes by the name of S-quad or Squad. In the private sector, the technology goes by the name of Silent Subliminal Presentation System and the technology has also been released to certain corporate vendors who have attached catchy brand names like BrainSpeak Silent Subliminals to their own SSSS-based products.

Whatever you call it, SSSS is a technology that uses subliminal programming that is carried over Ultra-High Frequency (UHF) broadcast waves, planting inaudible messages directly into the subconscious human mind. Perfected more than twenty years ago by the Department of Defense and battlefield-tested upon unwitting Iraqi soldiers serving in the army of Saddam Hussein in the Gulf War during 1991, SSSS is a sinister weapon that may have been been developed for a specific mission: the total subjugation of the American people.

Whether SSSS is coupled with the HDTV signal as its means of delivery into the minds of an unsuspecting U.S. populace or not, it can be deployed by many different devices, including HAARP and GWEN towers, which would effectively blanket the entire nation at once. In fact, Judy Wall says that “there is evidence that the US Government has plans to extend the range of this technology to envelop all peoples, all countries. This can be accomplished, is being accomplished, by utilizing the nearly completed HAARP project for overseas areas and the GWEN network now in place in the US. The US Government denies all this.”

But the most insidious aspect of SSSS is that it is completely undetectable by those being targeted. Because it delivers its subliminal programming directly to the human brain via the auditory sense at frequencies that humans are incapable of perceiving as sound, there is no defense against it. Everyone on the planet is equally susceptible to mind control via SSSS and there isn’t any escape from it, as the UHF waves can be transmitted over very long distances from remotely located sources and will pass through walls and other objects as if they are not there. UHF is the frequency (100mhz) that has been used for television and radio broadcasting for as long as these media have existed. SSSS is designed to utilize UHF as a carrier wave.

Even more insidious, though, is the fact that, coupled with the use of supercomputers, an individual’s unique electroencephalographic (EEG) patterns can be digitally altered and then stored for rebroadcast via digital UHF. According to Judy Wall, editor and publisher of Resonance, the newsletter of the Bioelectromagnetics Special Interest Group, these computer-enhanced EEGs “can identify and isolate the brain’s low-amplitude ‘emotion signature clusters,’ synthesise them and store them on another computer. In other words, by studying the subtle characteristic brainwave patterns that occur when a subject experiences a particular emotion, scientists have been able to identify the concomitant brainwave pattern and can now duplicate it.” These modified emotion signature clusters can then be broadcast over UHF carrier frequencies (i.e., regular TV and radio signals) directly into the brain where they can then “silently trigger the same basic emotion in another human being.” In other words, if the emotional signature cluster for, say, a feeling of hopelessness and despair is being fed directly into your brain via unseen radio waves, you will feel those emotions. The implications of this are, quite literally, mind boggling.”
- http://ppjg.wordpress.com/
Posted by CoyotePrime at 12:05 PM