“Learning And Yearning”
by Chet Raymo
“This photograph of the Eagle Nebula made by a rather modest telescope - the 0.9 meter instrument at Kitt Peak, Arizona - appeared on APOD (click to enlarge). I sat in front of the computer screen for ten minutes, breathless. One tiny corner of the Milky Way Galaxy, one of tens of billions of galaxies that we can potentially see with our telescopes! At the center are the so-called "Pillars of Creation" from a famous Hubble photograph. 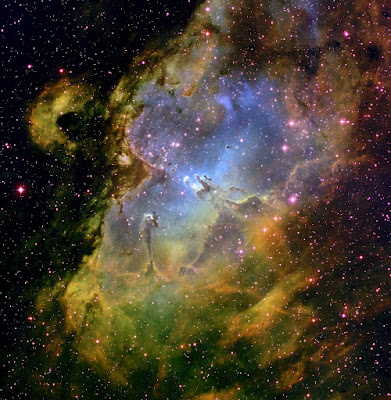 Click image for very large size.
I recall when the Hubble photograph appeared in the media hundreds of viewers claimed to see the face of Jesus in the billowing clouds. Which prompted these observations from "Skeptics and True Believers": "In an article on the psychological basis of belief, the psychologist James Alcock proposed that two aspects of the human brain might be called the "yearning unit" and the "learning unit." He probably didn't mean these terms to be taken literally, as referring to separate compartments of the brain, but yearning and learning are certainly central to the way we interact with the world. It is hard to imagine how we can be fully human without a little of each. Finding the proper balance between the two is a task that can keep us occupied for most of our lives.

Learning is listening to parents, wise men, shamans. Learning is reading, going to school, traveling, doing experiments, being skeptical. Learning is looking behind the curtain for the Wizard of Oz, touching the stove to see if it's hot, not taking anyone's word for it. In science, learning means trying as hard to prove that something is wrong as to prove it right, even if that something is a cherished belief.