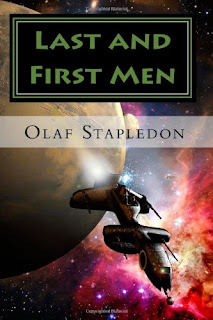 “Last and First Men: A Story of the Near and Far Future”
by Olaf Stapledon
“Great are the stars, and man is of no account to them. But man is a fair spirit, whom a star conceived and a star kills. He is greater than those bright blind companies. For though in them there is incalculable potentiality, in him there is achievement, small, but actual. Too soon, seemingly, he comes to his end. But when he is done he will not be nothing, not as though he had never been; for he is eternally a beauty in the eternal form of things.

Man was winged hopefully. He had in him to go further than this short flight, now ending. He proposed even that he should become the Flower of All Things, and that he should learn to be the All-Knowing, the All-Admiring. Instead, he is to be destroyed. He is only a fledgling caught in a bush-fire. He is very small, very simple, very little capable of insight. His knowledge of the great orb of things is but a fledgling's knowledge. His admiration is a nestling's admiration for the things kindly to his own small nature. He delights only in food and the food-announcing call. The music of the spheres passes over him, through him, and is not heard.

Yet it has used him. And now it uses his destruction. Great, and terrible, and very beautiful is the Whole; and for man the best is that the Whole should use him.

But does it really use him? Is the beauty of the Whole really enhanced by our agony? And is the Whole really beautiful? And what is beauty? Throughout all his existence man has been striving to hear the music of the spheres, and has seemed to himself once and again to catch some phrase of it, or even a hint of the whole form of it. Yet he can never be sure that he has truly heard it, nor even that there is any such perfect music at all to be heard. Inevitably so, for if it exists, it is not for him in his littleness.

But one thing is certain. Man himself, at the very least, is music, a brave theme that makes music also of its vast accompaniment, its matrix of storms and stars. Man himself in his degree is eternally a beauty in the eternal form of things. It is very good to have been man. And so we may go forward together with laughter in our hearts, and peace, thankful for the past, and for our own courage. For we shall make after all a fair conclusion to this brief music that is man."
Freely download "Last and First Men" here:
http://www.e-booksdirectory.com/details.php?ebook=3939
Posted by CoyotePrime at 4:54 PM