“Have We Met? Tracing Face Blindness to Its Roots” 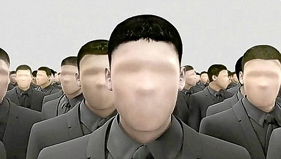 “Have We Met? Tracing Face Blindness to Its Roots”
by Karen Barrow
“Close your eyes. Picture your closest friend. Maybe you see her blue eyes, long nose, brown hair. Perhaps even her smile. If you saw her walking down the street it would match your imagined vision. But what if you saw nothing at all?

James Cooke, 66, of Islip, N.Y., can't recognize other people. When he meets someone on the street, he offers a generic "hello" because he can't be sure if he's ever met that person before. "I see eyes, nose, cheekbones, but no face," he said. "I've even passed by my son and daughter without recognizing them." He is not the only one. Those with prosopagnosia, also known as face blindness, can see perfectly well, but their brains are unable to piece together the information needed to understand that a collection of features represents an individual's face. The condition is a neurological mystery, but new research has shed light on this strange malady.

One of the keys to understanding face recognition, it seems, is understanding how the brain comes to recognize voices. Some scientists had believed that faces and voices, the two main ways people recognize one another, were processed separately by the brain. Indeed, a condition parallel to prosopagnosia, called phonagnosia, similarly leaves a person unable to distinguish a familiar voice from an unfamiliar one. But by testing for these two conditions simultaneously, researchers at the Max Planck Institute for Human Cognitive and Brain Sciences in Germany recently found evidence that face and voice recognition may be linked in a novel person-recognition system.

Using M.R.I., the scientists looked at the brain activity of 19 healthy volunteers as they were led through tasks that tested their ability to recognize both faces and voices. The researchers found that regions of the brain already associated with facial recognition, like the fusiform face area in the occipital lobe, are directly linked to regions responsible for voice recognition, mostly in the temporal lobe. This research helps explain why a person with prosopagnosia may still have difficulty determining who a person is even after she has begun to speak. "People with prosopagnosia don't have the benefit of learning voices with faces," said Katharina von Kriegstein, author of the study, which was published in September in The Journal of Neuroscience.

The challenge for scientists is to find out where this system breaks down. Are these connections in the brain missing entirely, or are people unable to recognize faces and voices simply unable to use these links in some way? It is unclear how many people have these conditions. Many don't even realize they have problems with facial or voice recognition. While some develop these difficulties after a brain injury or trauma, others develop it in childhood.

For Mr. Cooke, who lives with his two grown children, face blindness first surfaced after brain surgery for an unrelated condition. Three physicians stood by his bed in the hospital the day after surgery to ask how he was feeling. Mr. Cooke didn't think he had met the doctors before, so he gave some generic responses. After the doctors left, Mr. Cooke's mother came in to find out what his surgeon had to say. Mr. Cooke was shocked to discover he had just been speaking with his own doctor. "I didn't recognize that I didn't recognize him," he said. He went home, and the face blindness continued. Months later, he still couldn't recognize his son, let alone his son's friends when they visited. The cashiers at the grocery store had turned into strangers. Neighbors' faces were completely foreign. He went from neurologist to neurologist until one recognized that he had prosopagnosia, most likely a side effect of his surgery. While there is no treatment or cure for Mr. Cooke, figuring out why he was no longer able to recognize his own children was a relief. "It was good to hear that what I was experiencing was real and not in my imagination," he said.

Dori Frame, 51, of Brooklyn, is less certain about the cause of her face blindness, as she doesn't remember having difficulty recalling faces as a child. She did suffer a severe head injury at age 16 while horseback riding, but it is unclear whether that caused her prosopagnosia as an adult. "My eyes see just fine," said Ms. Frame. "But when I look away, I can't recall the picture in my mind." Ms. Frame didn't realize she had a problem until she learned about prosopagnosia in a psychology class. "It's like colorblindness," she said. "You don't realize you see colors differently than anyone else until someone points it out to you."

Brad Duchaine, who researches face blindness at Dartmouth, says that after giving talks about prosopagnosia, he is often approached by audience members who have just realized that their difficulty keeping movie characters straight or identifying co-workers on the street may be more than just a quirk. "I think there's a lot of people who have difficulty and just don't know it," he said.

With no treatments, those with face blindness have to rely on simple coping strategies. "They use all those other cues that everyone else uses, just to a greater degree," Dr. Duchaine said. For example, Ms. Frame can recall a person's hairstyle and body type and how they move. "But when my husband gets a haircut, it takes me a while to reconcile that," she said. Mr. Cooke has his own strategies. He knows that if he sees a tall, blond man in his kitchen, it's most likely his son. A tall, blonde woman cleaning the house is probably his daughter. "However, I have mistaken my kids' friends for them," he said.

The condition has unexpected social consequences. How do you explain to everyone you meet that you may not recognize them later? "I live in fear of making people feel unimportant by not recognizing them," Ms. Frame said. Mr. Cooke was once on a date with a brunette who knew about his condition, he said, when he excused himself to use the restroom. Returning, he saw a pretty, brown-haired woman sitting alone, so he slipped into the chair across from hers. "My date came running across the restaurant to tell me I was at the wrong table," he said. Ms. Frame isn't as open about her face blindness. Whenever she is meeting someone, she arrives early, so her friend has to find her. Still, even with prosopagnosia often at the forefront of her mind, Ms. Frame often forgets her difficulties. "It still seems bizarre to me," she said. "You mistake yourself for someone else in the mirror, and you feel so silly when you realize it's you."
- http://www.sott.net/
Posted by CoyotePrime at 8:37 PM