"A Look to the Heavens, With Chet Raymo"

"The Night Is Our Window On The Infinite"
by Chet Raymo
"This is the time of the year when we catch Orion sneaking back into the sky before we hit the sack. I couldn't resist posting this new Hubble image of the Great Orion Nebula, the middle "star" of the Hunter's scabbard. Click to enlarge. 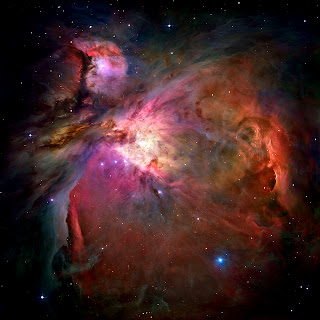 Click image for larger size.
A scabbard! Our ancestors looked into the night and saw images of ourselves. A hunter stumbling blind across the night, his dogs at his side. A Virgin with her sheaf of wheat. A Boxer and a Horseman, twin brothers, arm in arm. I have just been reading anthropologist Stewart Guthrie's "Faces in the Clouds: A New Theory of Religion," which documents the universal human propensity to explain the inanimate and the non-human in terms of animate and human characteristics. Thus Orion. Thus Virgo and Gemini. Thus the gods.
This is an idea I have touched on over the years, most recently in "Walking Zero," and it is nice to see someone with psychological and anthropological expertise flesh it out. It is not exactly a "new theory." Anyone who has read Piaget on the animism and artificialism of children will make the extrapolation to the gods. But who will look at this Hubble image of the Great Orion Nebula and pretend to see a God with a human face? Whatever divinity we see here as through a glass darkly is certainly not a projection of the human self. Three Persons in One God? Try all persons in one God. Try 100 billion galaxies in one God. Try humility. Try awed silence.”
- http://blog.sciencemusings.com/2006_11_01_archive.html
Posted by CoyotePrime at 8:34 PM