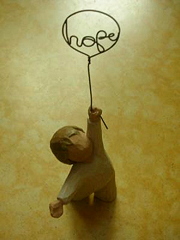 "Man's Search For Meaning" (Excerpt)
by Viktor Frank
"When a man finds that it is his destiny to suffer, he will have to accept his suffering as his task; his single and unique task. He will have to acknowledge the fact that even in suffering he is unique and alone in the universe. No one can relieve him of his suffering or suffer in his place. His unique opportunity lies in the way in which he bears his burden.
For us, as prisoners, these thoughts were not speculations far removed from reality. They were the only thoughts that could be of help to us. They kept us from despair, even when there seemed to be no chance of coming out of it alive. Long ago we had passed the stage of asking what was the meaning of life, a naive query which understands life as the attaining of some aim through the active creation of something of value. For us, the meaning of life embraced the wider cycles of life and death, of suffering and of dying.
Once the meaning of suffering had been revealed to us, we refused to minimize or alleviate the camp's tortures by ignoring them or harboring false illusions and entertaining artificial optimism. Suffering had become a task on which we did not want to turn out backs. We had realized its hidden opportunities for achievement, the opportunities which caused the poet Rilke to write, "Wie viel ist aufzuleiden!"(How much suffering there is to get through!) Rilke spoke of "getting through suffering" as others would talk of "getting through work." There was plenty of suffering for us to get through. Therefore, it was necessary to face up to the full amount of suffering, trying to keep moments of weakness and furtive tears to a minimum. But there was no need to be ashamed of tears, for tears bore witness that a man had the greatest of courage, the courage to suffer. Only very few realized that. Shamefacedly some confessed occasionally that they had wept, like the comrade who answered my question of how he had gotten over his edema, by confessing, "I have wept it out of my system."
The tender beginnings of a psychotherapy or psycho-hygiene were, when they were possible at all in the camp, either individual or collective in nature. The individual psychotherapeutic attempts were often a kind of "life-saving procedure." These efforts were usually concerned with the prevention of suicides. A very strict camp ruling forbade any efforts to save a man who attempted suicide. It was forbidden, for example, to cut down a man who was trying to hang himself. Therefore, it was all important to prevent these attempts from occurring.
I remember two cases of would-be suicide, which bore a striking similarity to each other. Both men had talked of their intentions to commit suicide. Both used the typical argument—they had nothing more to expect from life. In both cases it was a question of getting them to realize that life was still expecting something from them; something in the future was expected of them. We found, in fact, that for the one it was his child whom he adored and who was waiting for him in a foreign country. For the other it was a thing, not a person. This man was a scientist and had written a series of books which still needed to be finished. His work could not be done by anyone else, any more than another person could ever take the place of the father in his child's affections.
This uniqueness and singleness which distinguishes each individual and gives a meaning to his existence has a bearing on creative work as much as it does on human love. When the impossibility of replacing a person is realized, it allows the responsibility which a man has for his existence and its continuance to appear in all its magnitude. A man who becomes conscious of the responsibility he bears toward a human being who affectionately waits for him, or to an unfinished work, will never be able to throw away his life. He knows the "why" for his existence, and will be able to bear almost any "how."
Posted by CoyotePrime at 5:40 PM