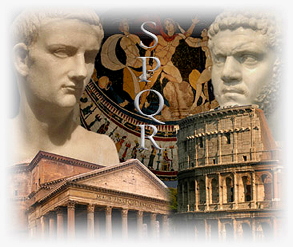 "Ancient Rome Reborn Digitally"
by ScienceDaily
"Rome's Mayor Walter Veltroni officiated at the first public viewing of "Rome Reborn," a 10-year project based at the University of Virginia and begun at the University of California, Los Angeles (UCLA) to use advanced technology to digitally rebuild ancient Rome. An international team of archaeologists, architects and computer specialists from Italy, the United States, Britain and Germany employed the same high-tech tools used for simulating contemporary cities such as laser scanners and virtual reality to build the biggest, most complete simulation of an historic city ever created. “Rome Reborn" shows almost the entire city within the 13-mile-long Aurelian Walls as it appeared in A.D. 320. At that time Rome was the multicultural capital of the western world and had reached the peak of its development with an estimated population of one million.
"Rome Reborn" is a true 3D model that runs in real time. Users can navigate through the model with complete freedom, moving up, down, left and right at will. They can enter important public buildings such as the Roman Senate House, the Colosseum, or the Temple of Venus and Rome, the ancient city’s largest place of worship. As new discoveries are made, "Rome Reborn" can be easily updated to reflect the latest knowledge about the ancient city. In future releases, the "Rome Reborn" project will include other phases in the evolution of the city from the late Bronze Age in the 10th century B.C. to the Gothic Wars in the 6th century A.D. Video clips and still images of "Rome Reborn" can be viewed at http://www.romereborn.virginia.edu
In recent years scientists, historians and archaeologists around the world have embraced 3D modeling of cultural heritage sites. Information technology has permitted them to recreate buildings and monuments that no longer exist or to restore digitally sites that have been damaged with the passage of time. The results can be used both in research to test new theories and in teaching to take students on virtual tours of the historical sites they are studying. By several orders of magnitude, "Rome Reborn" is the most ambitious such project ever undertaken. Bernard Frischer, director of the "Rome Reborn" project and director of the Institute for Advanced Technology in the Humanities at the University of Virginia, stated, "'Rome Reborn' is the continuation of five centuries of research by scholars, architects and artists since the Renaissance who have attempted to restore the ruins of the ancient city with words, maps and images. Now, through hard work by our interdisciplinary team, we have realized their seemingly impossible dream. This is just the first step in the creation of a virtual time machine, which our children and grandchildren will use to study the history of Rome and many other great cities around the world. We give special thanks to the Comune di Roma and its Museum of Roman Civilization (Rome) for the constant support and encouragement they gave the project from the start."
Diane Favro, co-initiator of "Rome Reborn" and director of the Experiential Technologies Center at UCLA said, "This amazing model allows us to appreciate individual buildings of ancient Rome within a broad urban context, and thus also to understand how the modern city took shape over time. Numerous UCLA students explored advanced technology and global resources to create the Rome Reborn model, an experience that transformed them from students into 21st century scholars."
Gabriele Guidi of INDACO Lab at the Politecnico di Milano said, "This is the first time that engineers have succeeded in creating a hybrid computer model of an entire city based on born-digital and reborn-digital elements. The project was an enormous technical challenge, and now that we have successfully met it, we can easily start building up a library of other city models in museums around the world." The "Rome Reborn" project was begun at UCLA in 1996 by professors Favro and Frischer. They collaborated with UCLA students from classics, architecture and urban design who fashioned the digital models with continuous advice from expert archaeologists. As the project evolved, it became collaborative at an international scale. In 2004, the project moved its administrative home to the University of Virginia, while work in progress continued at UCLA. In the same year, a cooperative research agreement was signed with the Politecnico di Milano."
- http://www.sciencedaily.com/releases/2007/06/070611092847.htm
•
Ancient Rome on Google Earth
"Having temporarily run out of 21st century worlds to conquer, Google is now travelling back in time. Users of the search giant's Google Earth can now add a new layer that lets them wander a 3D version of ancient Rome. In the Ancient Rome 3D layer, you can:
• Fly into Rome as it looked in 320 A.D.
• Tour the interior of famous buildings.
• Visit the sites in 3D such as the Roman Forum, Colosseum and the Forum of Julius Caesar.
• Learn about how the Romans lived.


The latest addition in Google's product release frenzy graphically recreates Rome as it looked 1688 years ago under Emperor Constantine. Users can take a virtual stroll around 6700 buildings, crafted in 3D in cooperation with the Rome Reborn project - a virtual reality project that saw UCLA, the University of Virginia, the Politecnico di Milano and others create a 3D model of the city in 320AD." More info and a download link are on Google's Ancient Rome 3D site:
http://earth.google.com/rome/
Download Google Earth: http://earth.google.com/intl/en/download-earth.html
Posted by CoyotePrime at 10:29 PM