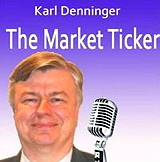 "Oh Not Again!"
by Karl Denninger
"'On Wednesday the Federal Reserve shared its thoughts on the course of interest rates—but not on the implications for the value of the dollar. The two can't be disconnected. The Fed's rationale on interest rates determines the stability of the dollar, which is the economic bedrock for price stability, capital inflows, growth and jobs. Obfuscation on the dollar works fine for Wall Street, which reaps billions in profits from the Fed's unstable dollar policy. It trades currencies and volatility, and makes a bundle protecting investors from the Fed by selling complex derivatives, interest-rate swaps, even triple-leveraged gold and currency funds pitched on television.'

But stable means stable.  It does not mean 2% inflation, as Bernanke asserts.  And stable is actually written into The Fed mandate - that is, the law allegedly governing Bernanke's operations. He just ignores it. By the way, this is not an academic exercise.  2% inflation is a cumulative 144% over a working man's 45 years of economic earning.  This effectively forces said man to stick his money into various schemes and scams lest it be eroded.  While the erosion over 10 years is not all that large (~22% over ten years) over his entire working life it's outrageous.
'When the currency weakens, the prices of staples rise faster than wages, hurting all but the rich who buy protection.'

And when the protection doesn't work everyone loses. Incidentally the hedges can't work for everyone; on balance a hedge is a negative-sum game.  I suspect Malpass knows this and doesn't vote it on purpose.
'Americans know this is a big problem but can't stop it. Texas Congressman Ron Paul has created an intensely popular presidential campaign around the need for stable money and limitations on the size (the Fed employs 22,000 people) and power of the Fed.'

Actually they can stop it.  The people can withdraw their consent for the two-party jackass system by voting for others.  Then there are less-lawful (and far more disruptive) options, all of which are available.  The simple truth is that the American Sheeple are consenting to this serial financial rape, as they have been for the last 30 years, because the politicians keep promising them "free stuff." There is, of course, no such thing. That Unicorn does not exist and those are not pretty colored candies, despite their appearance. They're poison and that's a horse with a horn glued on its head. Let me simply observe that Congress is well-named.
'Near-zero interest rates penalize savers and channel artificially cheap capital to government, big corporations and foreign countries.'

No again.  Loans are not capital, especially unbacked loans.  Capital formation requires excess production, otherwise known as savings.  The common canard that a stable monetary policy would inhibit capital deployment is also false; one should not deploy their capital unless they're convinced that the potential return outweighs the risk of the venture, and no component of that risk should theft by the government due to deficit spending and thus dilution of the currency.

Make no mistake, the problem does not lie with The Fed per-se.  The Fed's "low interest rates" are there to permit the profligacy of the government, yet the longer it goes on and the more the government abuses this deadly embrace the further into the coffin corner The Fed and Congress go.  As the debt accumulation rises the maximum interest rate that can be absorbed goes down until finally you reach the boundary where even a slight increase in rates results in instantaneous bankruptcy. This, of course, means you are (and have been) broke - you're just trying to avoid admitting it.

We the people are the ones in charge and we must stop acting like children.  There is simply no other option; we cannot continue down the path we are on, and we've reached the point of either admitting it and absorbing the adjustment that must come, or driving straight off the cliff. Choose wisely.”
- http://market-ticker.org/
Posted by CoyotePrime at 3:28 PM