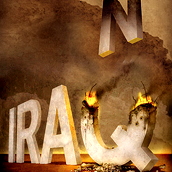 "Persian Gulf Option One: A False Flag"
by Patrick Henningsen
“Remember the Maine!”, was the cry back in 1898 from William Randolph Heart’s New York Journal – a forerunner the modern Murdoch press. Then, some 274 men lost their lives as a result of the explosion which sunk the USS Maine in Havana Harbor. Hearst even told a story of how the enemy had planted a torpedo beneath the Maine and detonated it from shore. The only problem was – it never happened. Nonetheless, the event used as the popular pretext for the United State’s entry into the Spanish-American War, and ultimately, the acquisition of Cuba itself by the US. This was now the modern blueprint for using propaganda in conjunction with, what is accepted by many historians, a type of false-flag event.

Some 70 years later, on June 8, 1967, during the Six-Day War, a similar event took place off the coast of Egypt. It could well have been, “Remember the Liberty!”, following an event which saw 34 US men killed and 170 wounded when the USS Liberty was attacked by both the Israeli Air Force and Israeli Navy torpedo boats. History now reveals that Israel’s slaughter of the USS Liberty crew was designed as a false flag event, but luckily Russia intervened at the last minute before Israel could sink the decorated American ship. Had it worked, it could have been used to drag the US and her allies into a new regional, or even a third world war - with who knows what consequences. See this post: "The Attack on USS Liberty, June 8, 1967", http://coyoteprime-runningcauseicantfly.blogspot.com/2009/06/attack-on-uss-liberty-june-8-1967.html

If a conflict is to ignite in the Persian Gulf in 2012, it is highly likely that the US or Israel will use the false flag option. Two reasons support this. Firstly, Iran lacks a motive to want to engage in a suicidal first strike against the axis powers – a move which would no doubt cost them thousands of innocent lives and billions in infrastructure. Frankly, it’s safe to say that it’s not at all in the Iranian national interest to start such a conflict. History does show however, that the US and Israel can – and will, employ the technique of the false flag attack, where they would engineer an incident and then blame it on the Iranians. By all accounts, this is also how the US was able to fake their way into the costly and bloody Vietnam War, via the infamous Gulf of Tonkin Incident.

Recent weeks have seen a massive build-up of naval assets in the Persian Gulf by both the US and the British. The irony of surface naval power in the 21st century is that it is only good for one thing, and that is the ‘projection of force’. In fact, Naval Power ceased to be a major factor geopolitical power-play since the dawn of the 20th century, when it was usurped by Air Power. As Great Britain learned in the Falklands War back in 1982, even a single French Exocet missile can sink a battleship, or aircraft carrier. Iran has more than this capability, so for all practical purposes, any American ships in the region are nothing more than bait – large, slow sitting targets. Which begs the obvious question: why would the US be sending its soon-to-be decommissioned, rusty chess piece – the 50 year old nuclear-powered USS Enterprise carrier into the line of fire in the Persian Gulf? A very large and expendable, floating museum, and one which, interestingly enough with its eight on board nuclear reactors… would probably cost a fortune to dispose of.

If other sides are drawn in to a conflict, most experts agree that it has the danger of escalating into a WWIII situation, and both sides would surely be losers in such a scenario, not to mention the global economy. However, we have the ideal set of conditions for a New Cold War to emerge in the early 21st Century – one where the Western Axis powers of the US, Europe, Israel and GCC countries sit on one side, and with Iran, Syria, Pakistan, China, and perhaps Russia sitting on the opposite side. This New Cold War will be more about the projection of power and securing sub-regional dominance in terms of economics – natural gas, mineral and trade relationships, as well as petroleum – than it will about the political ideologies that seemed to dominate the previous 20th Century Cold War.

On the surface, this latest spat between the US and Iran looks like a step closer to war, but on closer examination however, the present conditions are not at all ideal for a preemptive strike against Iran by the US, or Israel. Why? In a time when fuel consumption is down worldwide, and oil supplies are high, oil prices are defying economics and maintaining strength above $100 per barrel. It’s also worth noting that defense contracts – particularly in the GCC countries – are way up, meaning there is still much money to be made from this current crisis – on both sides, including Iran. Still though, we must keep our eyes open for that false flag from the west.”
- http://www.infowars.com/persian-gulf-option-one-a-false-flag/
•
The Heretic presents, Mike Rivero's "USS Enterprise False Flag" from http://whatreallyhappened.com/
Posted by CoyotePrime at 12:59 PM