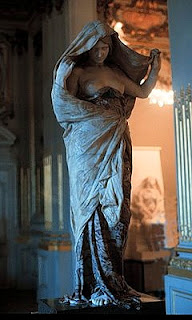 "Ancient Mother Of The World"
by Chet Raymo

"'Nature Unveiling Herself To Science,' created by Louis Barrias in 1899, stands on a pedestal in the Musee d'Orsay in Paris. The sculpture gives expression to one of the oldest themes in philosophy - and one of the most enduring. Sometime in the early 5th century B.C., Heraclitus famously said "Nature loves to hide." Forget for the moment that this three-word fragment of Greek text (phusis kruptesthai philei) lends itself to various translations. "Nature loves to hide" is how it has come down to us. From the time of the Socratics "nature" has been allegorically identified with the goddess Isis/Artemis, and the entire history of Western philosophy can be taken as a debate about the goddess and her veil.


Is nature ultimately unknowable? Does nature reveal herself as esoteric knowledge to the initiated? Can nature be known by reason? By experiment? By intuition? That is to say: Is the veil of Isis/Artemis impenetrable, does she remove the veil herself for the chosen few, or can her veil be stripped away by human cunning? And what is "nature" anyway?

As I write these words, I am sitting in a comfy chair in the stacks of the college library. All about me are thousands of volumes that in one way or another represent attempts to answer these questions. It is a measure of the profundity of those three words of Heraclitus that thousands of years later we are still trying to figure out what they mean. Many of us believe that natural science is as close as we'll get to lifting the veil. We are convinced that the dazzlingly successful applications of scientific knowledge are a sure sign we are doing something right. But a sizable part of the academic community nevertheless believes that nature cannot be known as she is, and that science is just one more stab at what lays beneath the veil, no more or less "true" than any other social construction of supposed reality. And, quite aside from the academic debates, the great majority of people believe that the only knowledge of the world that really matters has been revealed to them by God.

So there she stands, in the Musee d'Orsay, having revealed a teasing glimpse - coy smile, bared breasts, peekaboo toes - but still mostly wrapped in mystery. I suspect that another two-and-a-half millennia from now we'll still be wondering what the lovely goddess has yet to reveal.

Nature loves to hide. The aphorism is attributed to Heraclitus, although it is difficult to know exactly what he meant. "Nature" is generally taken to signify the hidden something that gives form and structure to the world. A physicist might understand it to mean the elusive "theory of everything." Johannes Kepler, in his essay on the snowflake, referred to the facultas formatrix, or "formative capacity" of nature. For the religious person, the most concise name for the hidden creative agency is "God."

The idea that God loves to hide is common in many religious traditions of the world. Christian mystics speak of the Deus absconditus, the absconded or unknowable divinity. Call it if you want Deus absconditus or facultas formatrix; the medieval mystic and the modern physicist seek the same deeply hidden essence of creation. The trouble comes when religious persons or scientists believe they have seen Isis in all her naked glory. The born-again Christian who claims to be a personal friend of the Creator, or the physicist who thinks we will soon know "the mind of God" are equally idolatrous.

In 384 C. E. the Christian emperor Gratian ordered the pagan Altar of Victory removed from the assembly hall of the Roman Senate. In an ecumenical spirit, the pagan politician Symmachus protested: "We contemplate the same stars, the heavens are common to all of us, and the same world surrounds us. What matters the path of wisdom by which each person seeks the truth? One cannot reach such a great mystery by a single path." For his tolerance, Symmachus was banished from Rome.

Nature loves to hide. We have learned much, especially through the instrumentality of science; we have much, much more to learn. Our knowledge is finite; what we have yet to learn is perhaps infinite. The assumption of knowability has been the cause of centuries of grief. A little modest agnosticism would become us all."
- http://blog.sciencemusings.com/2006_12_01_archive.html
Posted by CoyotePrime at 10:19 PM