Chet Raymo, “Caught In The Middle”

“Caught In The Middle”
by Chet Raymo

"It doesn't take a genius to recognize that human males have a propensity for intergroup violence, and that the killing is often accompanied by rape. One need only read the newspapers. The only question is to what extent these tendencies are innate or culturally inculcated. Nature or nurture? Or both? A new book, "Sex and War: How Biology Explains Warfare and Terrorism and Offers a Path to a Safer World," by population biologist Malcolm Potts and science writer Thomas Hayden, dishes up a bit of both. The violence is in our (male) genes, they maintain, but it is susceptible to cultural control. 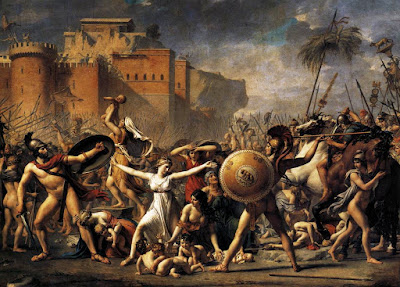 What the authors calls "behavioral propensity to engage in male coalitional violence" evolved as far back as the common ancestor of humans and chimps, they claim, although our other close relations, bonobos and gorillas, seem to have found more peaceful ways of living. Genes predispose, say Potts and Hayden, but cultural forces can alleviate the worst of male nastiness. By empowering women to be leaders in cultural, social and political spheres, the violent propensities of men can be restrained. Further, empowerment will give women control of their reproductive destinies, and will therefore result in fewer offspring. Less population pressure will reduce other factors fueling violence and conflict, the authors claim.

Anthropologist Hillard Kaplan reviews the book in the October 9, 2009, issue of "Science." He agrees that the available evidence suggests that male intergroup violence has a long evolutionary history. He believes this tendency was exacerbated into large scale warfare with the development of agriculture and the associated larger population groups and competition for fertile land. Kaplan believes that male group violence is stoked by poor economic prospect for young males. To the empowerment of women he would add education and jobs as a way to reduce antisocial behavior.

There is nothing particularly new or revolutionary about any of this. Progress? Yes, I suppose so, but we clearly have a long way to go before women exercise equal power in society, or before young men in the developing world, especially, have an economic stake in social stability. Meanwhile, as the painting above by Jacques-Louis David, "The Sabine Women," suggests, women and children will continue to be caught in the middle.”
- http://blog.sciencemusings.com/2009_10_01_archive.html
Posted by CoyotePrime at 8:00 PM