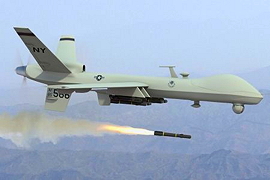 "In Stephen Crane's American classic, "The Red Badge of Courage," young Henry Fleming goes off to war fired by dreams of heroic sweep and grandeur. "He had read of marches, sieges, conflicts, and had longed to see it all. His busy mind had drawn for him large pictures extravagant in color, lurid with breathless deeds." In the war to preserve the Union he would mingle in one of the great affairs of the earth. He longs, yes longs, for the symbolic wound, the blood-red badge of courage.

The first foes Fleming encounters are some Confederate pickets along a river bank. One night while on guard duty he converses across the stream with one of them. "Yank," the Confederate says to him, "yer a right dum good feller." That friendly sentiment cast onto the still air makes the young soldier momentarily regret the war. By novel's end, regrets have multiplied, and Fleming has rid himself forever of the "red sickness of battle." He turns with a lover's thirst to images of tranquil skies, fresh meadows, cool brooks - and peace.

I grew up with the Civil War. My childhood home was a dozen miles from Chickamauga, and within sight of Lookout Mountain and Missionary Ridge. Beginning 150 years ago this June, my hometown, Chattanooga, Tennessee, became a nexus about which turned the fate of the Union. I don't recall, however, any sense of romance about that long ago conflict. Possibly because my grandmother's house, where I spent much of my time, was closer to the National Cemetery where thousands of Civil War battle casualties are buried than to the battlefields where they died - wave upon wave of white grave markers. And besides, another war was raging, in Europe and the Pacific, that was far more likely to capture the imagination of a pre-teen boy.

Somehow I have managed to live 75 years with tranquil skies, fresh meadows, cool brooks, and - at least for myself - peace. Only once have I held a gun in my hands, my uncle's .22 at age twelve. Only once, on that same occasion, have I used a gun to kill a living thing, a squirrel. For all of this, I count myself a lucky person, grateful that other men and women, more unlucky or more courageous than me, assumed the burden I managed to avoid.

And now we have a new kind of warfare, targeted killing by unmanned drones and robots, lethal strikes against militants and - inevitably - civilians halfway around the world by controllers sitting in front of computer monitors in Nevada. "Bug splat" the victims are called by the controllers, from the blurry demises they observe on their screens. No red badges of courage here.”
- http://blog.sciencemusings.com/2012/04/splat.html
Posted by CoyotePrime at 9:18 PM