As George Orwell wrote of Stanley Baldwin's and Neville Chamberlain's abdication of responsibility in the 1930s, the stupidity may be real or it may have evolved from an unwillingness to think : 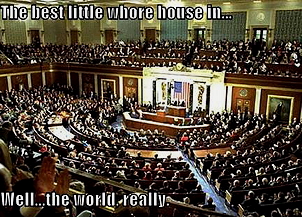 "What is to be expected of them is not treachery or physical cowardice, but stupidity, unconscious sabotage, an infallible instinct for doing the wrong thing... Clearly there was only one escape for them - into stupidity. They could keep society in its existing shape only by being unable to grasp that any improvement was necessary. Only when their money and power are gone will the younger among them begin to grasp what century they are living in."

Posted by CoyotePrime at 1:59 PM

Email ThisBlogThis!Share to TwitterShare to FacebookShare to Pinterest
Labels: congress