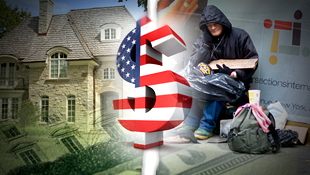 "How the Fed Favors The 1%"
by Mark Spitznagel

“A major issue in this year's presidential campaign is the growing disparity between rich and poor, the 1% versus the 99%. While the president's solutions differ from those of his likely Republican opponent, they both ignore a principal source of this growing disparity. The source is not runaway entrepreneurial capitalism, which rewards those who best serve the consumer in product and price. (Would we really want it any other way?) There is another force that has turned a natural divide into a chasm: the Federal Reserve. The relentless expansion of credit by the Fed creates artificial disparities based on political privilege and economic power.

David Hume, the 18th-century Scottish philosopher, pointed out that when money is inserted into the economy (from a government printing press or, as in Hume's time, the importation of gold and silver), it is not distributed evenly but "confined to the coffers of a few persons, who immediately seek to employ it to advantage." In the 20th century, the economists of the Austrian school built upon this fact as their central monetary tenet. Ludwig von Mises and his students demonstrated how an increase in money supply is beneficial to those who get it first and is detrimental to those who get it last. Monetary inflation is a process, not a static effect. To think of it only in terms of aggregate price levels (which is all Fed Chairman Ben Bernanke seems capable of) is to ignore this pernicious process and the imbalance and economic dislocation that it creates.

As Mises protégé Murray Rothbard explained, monetary inflation is akin to counterfeiting, which necessitates that some benefit and others don't. After all, if everyone counterfeited in proportion to their wealth, there would be no real economic benefit to anyone. Similarly, the expansion of credit is uneven in the economy, which results in wealth redistribution. To borrow a visual from another Mises student, Friedrich von Hayek, the Fed's money creation does not flow evenly like water into a tank, but rather oozes like honey into a saucer, dolloping one area first and only then very slowly dribbling to the rest.

The Fed doesn't expand the money supply by uniformly dropping cash from helicopters over the hapless masses. Rather, it directs capital transfers to the largest banks (whether by overpaying them for their financial assets or by lending to them on the cheap), minimizes their borrowing costs, and lowers their reserve requirements. All of these actions result in immediate handouts to the financial elite first, with the hope that they will subsequently unleash this fresh capital onto the unsuspecting markets, raising demand and prices wherever they do.

The Fed is transferring immense wealth from the middle class to the most affluent, from the least privileged to the most privileged. This coercive redistribution has been a far more egregious source of disparity than the president's presumption of tax unfairness (if there is anything unfair about approximately half of a population paying zero income taxes) or deregulation. Pitting economic classes against each other is a divisive tactic that benefits no one. Yet if there is any upside, it is perhaps a closer examination of the true causes of the problem. Before we start down the path of arguing about the merits of redistributing wealth to benefit the many, why not first stop redistributing it to the most privileged?”
- http://online.wsj.com/
http://www.zerohedge.com/
• 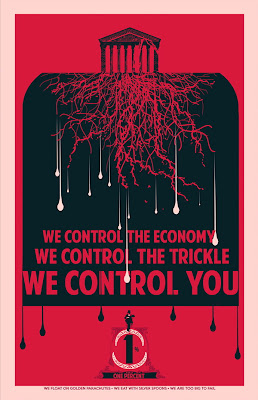 Click image for larger size.
Posted by CoyotePrime at 4:19 PM