"The cat just stuck his head into the canary cage and is eyeing his next feathered meal. I keep warning people about the government's plans to take your electronic digits. Remember the DTCC. But nobody listens. Uncle Sam, in a desperate attempt to fix its $16 trillion-plus deficit, is leering over Americans’ retirement nest egg as its new bailout fund. 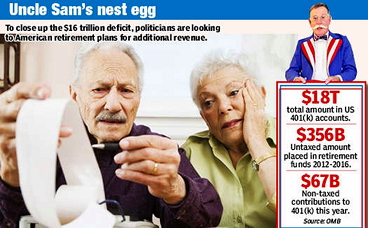 Capitol Hill politicians are assessing tax changes that could let the Internal Revenue Service lay claim to a portion of the $18 trillion sitting in 401(k) accounts and other tax breaks used by middle-class workers, including cutting the mortgage tax deduction. A commission looking for ways to close the deficit, and, noting the extent of 401(k) tax breaks, recommends an examination of the system as one way to prevent government bankruptcy.Besides 401(k)s, other possibilities include the mortgage-interest deduction on second homes, as well as benefits from employer-provided health insurance, which are untaxed now.

Under current 401(k) rules, total employee/employer contributions can’t exceed $50,000. In the proposed rule change, employer/employee contributions would be limited to 20 percent of the employee’s compensation, with a maximum of $20,000, the so-called 20/20 proposal. Another proposal being discussed in Congress says all tax deductions on 401(k)s and IRAs to be replaced with an 18 percent credit. The credit, according to a proposal that has been endorsed by economist William Gale, would be placed directly in a person’s retirement account. “Unlike the current system,” Gale told Congress, “workers’ and firms’ contributions to employer-based 401(k) accounts would no longer be excluded from income and would be subject to taxation, contributions to IRAs would no longer be tax-deductible and any contributions to a 401(k) plan would be treated as taxable income.” In other words, the employee and employer would no longer get a deduction under the Gale plan, they would qualify for a credit. And the credit would “increase [government] revenues by about $458 billion,” Gale says.

Last week a group of retirement industry experts went to Capitol Hill to criticize these proposed changes in retirement-plan rules. “These changes could have unintended consequences,” warns Lynn Dudley of the American Benefits Council (ABC). Testifying before the House Ways and Means Committee about the proposals, Randolf Hardock, of ABC’s board of directors, said, “[The idea] could seriously undermine the retirement savings system.”

Jack VanDerhei, research director of Employee Benefit Research Institute (EBRI), believes either of the two proposed 401(k) changes under review would have a “catastrophic” effect on the current retirement saving system. The 20/20 plan provisions curtailing non-taxable contributions would freeze out many higher-paid employees from signing up for a 401(k), which could lead some companies, according to critics, to question if plans would still be worth offering employees. Reducing retirement-plan contributions for those at the higher end of the wage scale will inevitably have a bad effect on those in the middle and at the bottom, ABC’s Dudley says.”
- http://beforeitsnews.com/
http://www.nypost.com/
Posted by CoyotePrime at 6:43 PM