This article, originally posted on May 20, 2011, provides excellent information about the current situation, which is relatively unchanged, certainly not under control. - CP

“Tokyo Electric Power Co. said one of the reactor cores at its stricken Fukushima Dai-Ichi nuclear plant is more seriously damaged than previously thought, setting back the utility’s plan to resolve the crisis. Fuel rods in the core of the No. 1 reactor are fully exposed, with the water level 1 meter (3.3 feet) below the base of the fuel assembly, Junichi Matsumoto, a general manager at the utility known as Tepco, told reporters at a briefing in Tokyo. Melted fuel has dropped to the bottom of the pressure vessel and is still being cooled, Matsumoto said. 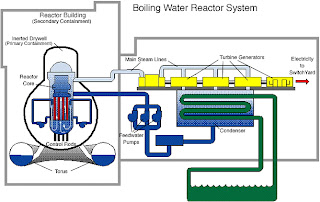 Japan is trying to contain the worst nuclear disaster since Chernobyl after a quake and tsunami two months ago knocked out power and cooling systems at the Fukushima station. While authorities have previously suspected a partial meltdown at unit 1, high radiation levels had prevented workers from entering the building to check the damage until last week. “What this means is this is probably going to be a much more difficult cleanup than they originally planned for,” said Paul Padley, a particle physicist at Rice University in Houston. The government and Tepco “have consistently appeared to be underestimating the severity of the situation.”

There’s no danger of another explosion like the one that blew the roof off the reactor in March, Matsumoto said at the briefing. That’s because the lack of water means there’s nothing for the zirconium-alloy cladding encasing the uranium to react with to create high-pressure clouds of hydrogen, said Roger N. Blomquist, principal nuclear engineer at the U.S. Energy Department’s Argonne National Laboratory near Chicago.

Holes Discovered: Fuel rods are submerged in water to prevent overheating that would crack the casing and release radiation, said Blomquist, who oversees the nuclear section at Argonne, a federal research center managed by the University of Chicago, birthplace of the atomic industry. “This is what operators of nuclear reactors want to avoid,” he said in a telephone interview. 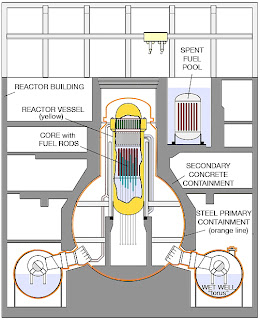 Holes have been found in the base of the pressure vessel, and most of the fuel has likely melted, Kyodo News reported yesterday, citing the utility. It’s possible the fuel has leaked into the containment vessel, which was damaged in the explosion, according to the report. Flooding the chamber was one of the steps Tepco outlined in April to bring the crisis under control. “The plan needs to be revised,” Matsumoto said. “We can’t deny the possibility that a hole in the pressure vessel caused water to leak.”

No China Syndrome: The company doesn’t know how long the rods have been exposed, it said in the briefing. It’s likely they’ve been uncovered since the first days of the disaster, Blomquist said. The six-reactor complex, Japan’s third-largest by capacity, has been spewing radiation since March 11 and the severity rating of the accident was raised to the same as Chernobyl nearly one month ago. The station is located about 220 kilometers (137 miles) north of Tokyo.

While the risk of explosions still exists if the rods aren’t kept cool, there’s no likelihood of a catastrophic meltdown, with fuel burning through the Earth’s crust, said Tony Roulstone, who directs the University of Cambridge’s masters program in nuclear technology. “China syndrome’s not a real risk because it would require too much energy.”

Evacuation Zone: The U.S. Nuclear Regulatory Commission, which has officials in Japan monitoring the crisis, hasn’t changed its advice of March 16, urging U.S. citizens to stay 50 miles from the stricken plant, said Eliot Brenner, an NRC spokesman. Brenner declined to comment on the specific condition of the Fukushima reactors. The agency is holding a public meeting to discuss a safety review of U.S. reactors which was triggered by the events in Japan.

Tepco has said it expects a sustained drop in radiation levels at the entire plant by July, according to the plan announced on April 17. Following that, a cold shutdown of reactors No. 1, 2 and 3 may take place as early as October, the utility said at the time. “
- http://preview.bloomberg.com/
•

So... what have we here? The 16,000 fuel rods are uncovered by water and are not being cooled, at a temperature of approximately 5,200 degrees F., and molten slag is dripping into the bottom of the containment vessel, which has holes in it, allowing water to leak out. They intentionally make no mention of the 40,000 spent, but still highly radioactive, fuel rods that were stored in the roof of the building directly over the reactor vessel, and which, since the roof has been destroyed by the hydrogen gas explosion that occurred, must be presumed to have fallen into the molten mass below. 56,000 total melting fuel rods. Spraying all this with water to cool it produces what? Steam, which rises into the atmosphere carrying radiation wherever the upper atmosphere wind currents carries it. All of which you already know courtesy of the non-stop, in depth and factual reporting you're getting from the main stream media, right? What? You're not? Not hearing anything at all? Isn't that curious... - CP
• 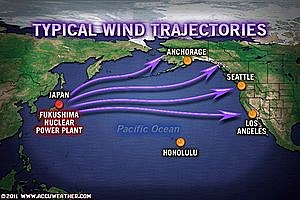 Jetstream Activity Between Japan and US, Europe, Updated Every 6 Hours: