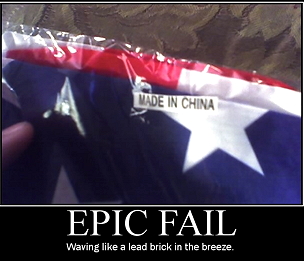 “Epic Fail- Part One”
by Jim Quinn, “The Burning Platform”

“Facts are to the mind what food is to the body.”
– Edmund Burke

"No wonder one third of Americans are obese. The crap we are shoveling into our bodies is on par with the misinformation, propaganda and lies that are being programmed into our minds by government bureaucrats, corrupt politicians, corporate media gurus, and central banker puppets. Chief Clinton propaganda mouthpiece, James Carville, famously remarked during the 1992 presidential campaign that, “It’s the economy, stupid”. Clinton was able to successfully convince the American voters that George Bush’s handling of the economy caused the 1991 recession. In retrospect, it was revealed the economy had been recovering for months prior to the election. No one could ever accuse the American people of being perceptive, realistic or critical thinking when it comes to economics, math, history or distinguishing between truth or lies. Our government controlled public school system has successfully dumbed down the populace to a level where they enjoy their slavery and prefer conscious ignorance to critical thought.

The next six months leading up to the November elections will surely provide a shining example of the degraded society we’ve become. Both parties and their propaganda machines, SuperPacs, and corporate media sponsors will treat the igadget distracted masses to hundreds of hours of lies, spin, and vitriol, designed to divert the public from the fact that both parties act on behalf of the same masters and have no intention of changing course of the U.S. Titanic to avert the iceberg dead ahead. We will be treated to storylines about race, gun control, the war on women, energy independence, global warming, the war on terror, the imminent threat of Iran and North Korea, Obamacare, Romneycare, and of course the economy, stupid.

There are 240 million voting age Americans. About 130 million will likely vote in the 2012 election based upon recent voter participation results. This means that 110 million Americans don’t give a crap about who runs this country or they’ve come to their senses and realize our votes don’t matter. Between 1840 and 1900 voter participation ranged between 70% and 82% as Americans took their civic duty seriously and believed their vote counted. Since 1913, when the politicians relinquished control of our currency to a private bank controlled by a small group of powerful men, voter participation for President has ranged between 49% and 62%. It hasn’t surpassed 57% since 1968. Now that corporations are people and our candidates are selected by a few rich men, the transformation from a republic to a corporate fascist state is almost complete. During the coming interminable political campaign you will hear about jobs until your ears bleed. I can guarantee that 98% of the rhetoric will be false. Neither party wants the American people to understand the truth about what happened to our economy and jobs over the last 100 years. It has been a bipartisan screw job and ignoring the facts doesn’t change them.

The first fact that can’t be ignored is how many Americans are actually unemployed today. Here is some truth you won’t get from a politician or media talking head:

* There are 243 million working age Americans.
* There are 142 million employed Americans.
* Only 101 million of the employed Americans are working more than 35 hours per week. This means that only 41.6% of all working age Americans have a full-time job.
* According to the government drones at the BLS, 88 million Americans have “chosen” to not be in the labor force – the highest level in U.S. history.
* The percentage of Americans in the workforce at 63.8% is the lowest since 1980 and down from a peak of 67.1% in 2000. The difference between these two percentages is 8 million Americans.
* The BLS reports there are only 12.7 million unemployed Americans in the country, down from 15.3 million in 2009.
* The BLS reports the unemployment rate has dropped from 10% in late 2009 to 8.3% today. Over this time frame the working age population grew by 5.7 million, while the number of employed Americans grew by 3.6 million. Only a government drone could interpret this data and report a dramatic decline in the unemployment rate."
- http://www.theburningplatform.com/?p=32878
•
This is an excerpt of the first part of the article. Please visit the link above for the entire piece, as well as part two when it becomes available. - CP
Posted by CoyotePrime at 2:31 PM