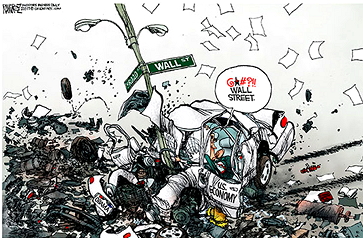 
"What is happening feels like a slow motion train wreck to me.  I am waiting for someone to flip a switch and turn it to real speed.  It’s as if people are numb to the bad news.  The mainstream media (MSM) won’t report it, and if they do, it is spun to look like something good is going on.  For example, the FDIC announced the 17th bank of the year failed last Friday.  The MSM doesn’t even bother reporting this ongoing disaster.  This works out to be about one failed bank each and every week since the first of the year.  For the MSM, this is a great big yawn.  (Click here for the FDIC.)  Here’s another example of spin from Bloomberg, last week, that said, “Sales of previously owned U.S. homes in March unexpectedly fell for the third time in the last four months, showing an uneven recovery in the housing market.”  (Click here for the complete Bloomberg story.)  The spin here is, “. . . showing an uneven recovery in the housing market.”   To that I say, what recovery?  Finally, the most disturbing story quoted Defense Secretary Leon Panetta saying, “We’re within an inch of war almost every day.”  (Click here for that story.)   That, too, produced a great big yawn and no sense of alarm whatsoever.  The only thing more disturbing than the news is the reaction to it.  This is why I want you to read James Howard Kunstler’s (Kunstler.com) latest post. He brilliantly sums up what’s going on in the world and why you should be concerned in the post below.  Enjoy."
•
"As If Nothing Matters"
By James Howard Kunstler

"The world gave the appearance of doing nothing and going nowhere over the past month – apart from the sensational liaison of Kim Kardashian and Kanye West, which, some believe, augurs a dazzling speed-up of the much prayed-for economic recovery, return to full employment, $2.50 gasoline by summer, and the selection of Jesus Christ as VP running mate by Mitt Romney – but, in fact, so much trouble is roiling under the surface all over the world that it makes you feel seasick on dry land.

It is true that the European financial fiasco is a story of such fantastic mystifying complexity that the public can’t possibly be expected to follow each twist of the plotline. But the fact is that nothing was fixed for Greece or after Greece and the hazard of evermore profound wreckage is assured. The only question is how many months before the appearance of normality in financial matters yields to fighting in the streets of supposedly civilized countries.

Spain, it was revealed this week, has turned to a form of finance that could only have been designed by M.C. Escher. The plan for stabilizing Spain’s hemorrhaging insolvency position works as follows: Spain’s big banks borrow billions from the European Central Bank (ECB); the Spanish banks then turn around and lend the Spanish government the money to fund a bailout operation for the Spanish banks; the Spanish banks then use the bailout money to buy Spanish sovereign bonds, that is, lend money to the government. The world received news of this dangerous idiocy with a yawn. You’d at least expect a few Germans to choke on a bratwurst here and there.

The idea that shenanigans like this can continue must amuse the historians looking on. But three weeks into April so far nothing has penetrated the stupendous wall of illusion that separates money matters from reality like the one-way mirror in the interrogation chamber of a police precinct where every last officer of the law is on the take.

The lesson in the first quarter of 2012 is that when anything goes, nothing matters. Jon Corzine, chief of the fraudster operation MF Global is still at large how many months after his firm pulled an abracadabra disappearing act on $1.2 billion of segregated customer accounts, many belonging to farmers and ranchers engaged in the normal options trade in commodities prices necessary to their business? Nobody has been fired at the Chicago Mercantile exchange or the Commodities Futures Trading Commission for this, either. No newsman has asked President Obama about any of these things, or how come Jon Corzine is still listed by the re-election campaign as a continuing major contributor. The New York Times, for one, is much more focused on major bullshit propaganda operations, such as its recent giant spread on how America will soon be an energy independent oil exporting nation.

No one in the American media is paying attention to the unfolding tragedy of Japan – and by this I refer not only to the unfinished Fukushima saga, but the parallel story of Japan closing down virtually its entire nuclear power industry necessitating gigantic additional imports of oil and gas to generate electric power – all of which points to the likelihood that Japan will become the first advanced industrial nation to bid sayonara to modernity and return to a neo-medieval socio-economic model of daily life.

The Middle West and North Africa still smolder away like giant root fires. Nothing has been settled politically and the prospects are excellent that Islamic maniacs will shortly be in charge of Egypt and Libya, not to mention Syria, or even America’s trillion-dollar battleground of Afghanistan where, after ten years of persistent struggle, we can’t control either the terrain or the behavior of the people who dwell on it. Meanwhile, half of Sudan’s oil production was blown up over the weekend. And King Abdullah of Saudi Arabia is not getting any younger at 88. Saudi spare oil capacity won’t matter so much when the kingdom is up in flames.

What I wonder is how long the American public will remain in its Kardashian trance. At this torpid moment no one believes that any theoretical political cohort in this land – tea-partiers, swindled youth, professional lefties (or what’s left of them), or the fugitive thinking centrists (wherever they are) – might bestir themselves to bust up a nominating convention or march on one of many debauched institutions in the nation’s capital, from the SEC to the wax museum formally known as the Department of Justice. I think differently, though. I think this grim interval of crisis consolidation is drawing to a close and, like the buds swelling on every tree in New England, events will soon burst into astounding efflorescence.”
- http://usawatchdog.com/numb-to-bad-news/#more-7751
Posted by CoyotePrime at 7:21 AM