"The TSA's Mission Creep Is Making The US A Police State" 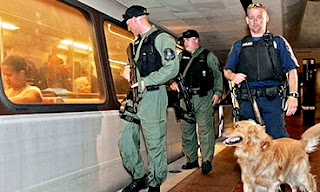 "The TSA's Mission Creep Is Making The US A Police State"
by Jennifer Abel
․
"Thus did a handful of rapacious citizens come to control all that was worth controlling in America. Thus was the savage and stupid and entirely inappropriate and unnecessary and humorless American class system created. Honest, industrious, peaceful citizens were classed as bloodsuckers, if they asked to be paid a living wage. And they saw that praise was reserved henceforth for those who devised means of getting paid enormously for committing crimes against which no laws had been passed. Thus the American dream turned belly up, turned green, bobbed to the scummy surface of cupidity unlimited, filled with gas, went bang in the noonday sun.” - Kurt Vonnegut

"Ever since 2010, when the Transportation Security Administration started requiring that travelers in American airports submit to sexually intrusive gropings based on the apparent anti-terrorism principle that "If we can't feel your nipples, they must be a bomb", the agency's craven apologists have shouted down all constitutional or human rights objections with the mantra "If you don't like it, don't fly!"

This callous disregard for travelers' rights merely paraphrases the words of Homeland Security director Janet Napolitano, who shares, with the president, ultimate responsibility for all TSA travesties since 2009. In November 2010, with the groping policy only a few weeks old, Napolitano dismissed complaints by saying "people [who] want to travel by some other means" have that right. (In other words: if you don't like it, don't fly.)

But now TSA is invading travel by other means, too. No surprise, really: as soon as she established groping in airports, Napolitano expressed her desire to expand TSA jurisdiction over all forms of mass transit. In the past year, TSA's snakelike VIPR (Visual Intermodal Prevention and Response) teams have been slithering into more and more bus and train stations – and even running checkpoints on highways – never in response to actual threats, but apparently more in an attempt to live up to the inspirational motto displayed at the TSA's air marshal training center since the agency's inception: "Dominate. Intimidate. Control."

Anyone who rode the bus in Houston, Texas during the 2-10pm shift last Friday faced random bag checks and sweeps by both drug-sniffing dogs and bomb-sniffing dogs (the latter being only canines necessary if "preventing terrorism" were the actual intent of these raids), all courtesy of a joint effort between TSA VIPR nests and three different local and county-level police departments. The new Napolitano doctrine, then: "Show us your papers, show us everything you've got, justify yourself or you're not allowed to go about your everyday business."

Congresswoman Sheila Jackson-Lee praised these violations of her constituents' rights with an explanation asinine even by congressional standards: "We're looking to make sure that the lady I saw walking with a cane … knows that Metro cares as much about her as we do about building the light rail." See, if you don't support the random harassment of ordinary people riding the bus to work, you're a callous bastard who doesn't care about little old ladies.

No specific threats or reasons were cited for the raids, as the government no longer even pretends to need any. Vipers bite you just because they can. TSA spokesman Jim Fotenos confirmed this a few days before the Houston raids, when VIPR teams and local police did the same thing to travelers catching trains out of the Amtrak station in Alton, Illinois. Fotenos confirmed that "It was not in response to a specific threat," and bragged that VIPR teams conduct "thousands" of these operations each year.

Still, apologists can pretend that's all good, pretend constitutional and human rights somehow don't apply to mass transit, and twist their minds into the Mobius pretzel shapes necessary to find random searches of everyday travelers compatible with any notion that America is a free country. "Don't like the new rules for mass transit? Then drive."

Except even that doesn't work anymore. Earlier this month, the VIPRs came out again in Virginia and infested the Hampton Roads Bridge-Tunnel, also known as the stretch of Interstate 64 connecting the cities of Hampton and Norfolk. Spokesmen admitted again that the exercise was a "routine sweep", not a response to any specific threat. Official news outlets admitted the checkpoint caused a delay (further exacerbated by a couple of accidents), but didn't say for how long. Local commenters at the Travel Underground forums reported delays of 90 minutes.

I grew up in the Hampton Roads region of Virginia. When I was a kid, my dad crossed the bridge-tunnel every day while commuting to work. When I was in university, I did the same thing. The old conventional wisdom said "Get to the airport at least two hours early, so TSA has time to violate your constitutional rights before boarding." What's the new conventional wisdom – "Leave for any destination at least 90 minutes early, so TSA can violate your rights en route"?

Airports, bus terminals, train stations, highways – what's left? If you don't like it, walk. And remember to be respectfully submissive to any TSA agents or police you encounter in your travels, especially now that the US supreme court has ruled mass strip-searches are acceptable for anyone arrested for even the most minor offense in America. If you're rude to any TSA agent or cops, you risk being arrested on some vague catch-all charge like "disorderly conduct". Even if the charges are later dropped, you'll still undergo the ritual humiliation of having to strip, squat, spread 'em and show your various orifices to be empty.

Can I call America a police state now, without being accused of hyperbole?"
- http://www.guardian.co.uk/
•
"Dominate. Intimidate. Control." WHAT? Excuse me, I meant WTF?!!! THIS is what we are now in this glorious land of the free and the home of the brave? Excuse me again while I go vomit in disgust and shame for what we've become... - CP
Posted by CoyotePrime at 1:53 PM