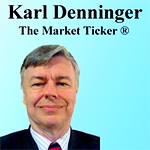 "But nobody could have seen this coming! "Sales of bonds tied to payments on subprime car loans are accelerating at the fastest pace in five years as investors seek high yields amid speculation the Federal Reserve will keep interest rates at record lows until mid-2015.

This is amusing.  Truly amusing.  The "attraction" for the issuers of these Frankenstein monsters is clear, if you read a bit further down: "The subprime auto finance business has grown during the past two years as new lenders compete to make loans with rates of about 17 percent annually, while being able to finance themselves at an average rate of less than 2 percent, Moody’s Investors Service said in a July 17 report. With losses ranging from 1 percent to 3 percent, originators collect annual spreads of about 12 percent, according to the New York-based firm."

Funding costs under 2% and rates charged to borrowers of 17%- on automobiles?! No wonder auto sales are "up"- fog-a-mirror loans are back, and the consumer is the one getting hosed this time.  Paying 17% for money to buy a car is just plain nuts. This will seem to work just fine right up until that subprime borrower can't pay, at which point the game will (again) come crashing down around their ears.  The fun with these sorts of deals is that people will generally make their car payment before virtually anything else, since without a car you're not going to get to work.

Bling and "aspirational buying" by people with crap credit is still going on... "Perella’s CarFinance Capital LLC funded more than $100 million in auto loans in its first 10 months of business as it works with more than 1,500 auto dealers serving “non-prime”consumers, who now account for more than a third of U.S. car buyers, the Irvine, California-based company said in an April 24 statement announcing an expansion in Texas."

That's insane. But you know the old saying from Citibank, right?  So long as the music is playing you have to get up and dance. GM, incidentally, is saying something else entirely about its future prospects in its stock price and Ford isn't doing much better...”
- http://market-ticker.org/
Posted by CoyotePrime at 12:36 PM