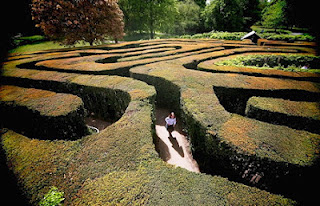 “Free Will?”
by Chet Raymo

“In an essay in the 14 May, 2009 issue of “Nature”, German biologist Martin Heisenberg asks the question: "Is free will an illusion?" And he answers: No. We are free, says Heisenberg, if our actions are self-generated, and not mere responses to external stimuli. But how can they be self-generated in a world of cause and effect? As befitting the son of Werner Heisenberg, father of the Uncertainty Principle, Martin invokes the stochastic nature of quantum mechanics. Presumably, randomly firing neurons equal free will. One does not have to be consciously aware of an action for that action to be self-generated, says Heisenberg.

I did not find his essay to be a convincing defense of free will. For one thing, no one that I know of has shown that quantum effects have anything to do with the firing of neurons. And secondly, why should we be morally responsible for actions that are triggered by quantum noise rather than cause and effect? Further, how can we be morally responsible for an action that we are not aware of until it has been initiated?

Free will has traditionally been defined within a context of philosophical dualism. Free actions are initiated by intentionality in a nonphysical realm, the immaterial soul. This assumes that conscious intention precedes brain activity. That this is not the case is shown rather convincingly in experiments described in the 8 May, 2009 issue of "Science". Researchers electrically stimulated patients undergoing awake brain surgery. The stimuli excited movements of the limbs or movement of the lips to talk. The patients became aware of intentionality after the stimulation. That is to say, conscious intention came after the brain activity that initiated action. This is pretty important stuff, from a philosophical point of view. It suggests that a dualistic understanding of free will is untenable. Is free will then an illusion? Don't expect the debate to end soon. We have too much morally invested in the idea of free will- and of a nonmaterial self- to concede the field to the physicalists.

I have elsewhere suggested that a more satisfying place to look for free will is in what is sometimes called chaos theory. In sufficiently complex systems with many feedback loops- the global economy, the weather, the human nervous system- small perturbations can lead to unpredictable large-scale consequences, though every part of the system is individually deterministic. This has sometimes been called- somewhat facetiously- the butterfly effect: A butterfly flaps its wings in China and triggers a cascade of events that results in a snowstorm in Chicago. Chaos theory has taught us that determinism in complex systems does not imply predictability.

An example: Photons of light and odor molecules from a piece of candy stimulate neurons in my optical and olfactory organs. Signal-transduction cascades inform my brain. Mmm, candy! Do I pick it up? Do I put it in my mouth? My action depends not only upon the external stimuli and my genetically inborn taste for sweets but also upon prior experiences and anticipations of future consequences as recorded in the soft-wired sections of my brain. I pick up the candy or I do not, depending upon a hugely complex- and to an outside observer unpredictable- conversation of molecules. This is not what traditional philosophers meant by free will, but is indistinguishable from what traditional philosophers meant by free will, i.e., the power to make free choices unconstrained by external agencies. If it walks like a duck and quacks like a duck, it's a duck.

When all is said and done, free will is a social construct, not a scientific hypothesis. Humans long ago discovered that living peaceably in groups requires a notion of individual responsibility. Responsibility implies freedom. In contemporary society, it is the judicial system that ultimately decides to what extent our actions are "free.”
- http://blog.sciencemusings.com/
Posted by CoyotePrime at 8:59 PM