"Collapse Of Financial System Will Come In August, Maybe September?" 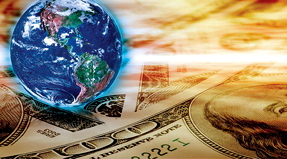 "Who said the dog days are over? Disappointed by the lack of aggressive action by the U.S. Federal Reserve at the meeting of its powerful rate-setting committee last week, and assuming a wait-and-see posture on results from this week's European summit, pessimistic market-watchers are turning once again to guessing when the clock atop the euro zone time-bomb will finally run to 0.

The consensus? The world economy has entered a final countdown with three months left, and investors should pencil in a collapse in either August or September.

Citing a theory he has been espousing since 2010 that predicts "a future lack of policy flexibility from the monetary and fiscal side," Jim Reid, a strategist at Deutsche Bank, wrote a note Tuesday that gloated "it feels like Europe has proved us right." "The U.S. has the ability to disprove the universal nature of our theory," Reid wrote, but "if this U.S. cycle is of completely average length as seen using the last 158 years of history (33 cycles), then the next recession should start by the end of August."

Reid is not the only one on Wall Street invoking history to predict a late-summer crisis. Since the employment data starting looking pear-shaped in April, economists and strategists have been quick to point out that 2012 is, in economic terms, a deja vú to 2011, when unexpectedly strong gains in manufacturing and employment during the first three months of the year fizzled coming in the summer. Those holding on to the "mirror image" theory point out that, if the pattern continues, things will turn sour very quickly sometime in August or September. To wit, August 2011 was the month that brought the Standard and Poor's downgrade of the U.S. sovereign credit rating and accompanying volatility in the equity markets. It was also the month the European Central Bank acknowledged just how badly the situation was going in Europe, stepping in to buy sovereign bonds.

Last September was not much kinder to the global economy, bringing an intensification of the crisis that prompted the Fed to begin its "Operation Twist" program of monetary accommodation. This year, pessimists are pointing to the next meeting of the Fed's rate-setting body, on Aug. 1; the next "progress report" on Greece by the institutions providing bailout monies to that country, also in August; or the September release of the results by auditors currently combing through the Spanish banking system, scheduled for September, as possible catalysts for the next crisis. "Historically, August is a good month for a big European crisis," Simon Johnson, a prominent MIT economist, wrote in the New York Times' Economix blog on June 21.

Pundits and experts had been putting a deadline on the current crisis for weeks now. Earlier in June, for example, billionaire financier George Soros noted European leaders had a "three months' window" to resolve the political factors underlying the economic crisis in the Continent. However, the last week has seen a lot more calendar-marking, sparked by an IMF working paper on the frequency of banking crises that showed September as a huge outlier, with 24 of the 147 worldwide occurences since 1970 that the paper's authors took into account happening that month. Those results were heavily influenced by including data from the disastrous year 2008, but that did not stop doomsayers from using the very scary chart in the report to prove a point. 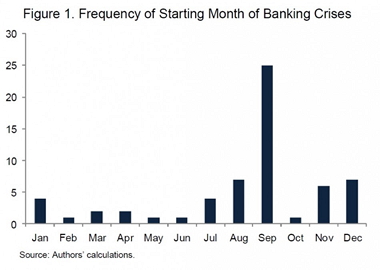 Frequency of Banking Crises, as Shown in IMF Working Paper

"The frequency with which the world goes to hell in September seems hardly random," Greg Ip, a blogger at The Economist, wrote in response to the paper. "Maybe it's because policymakers and bankers don't confront their problems until they get back from vacation, the macro equivalent of doctors scheduling c-sections during office hours."

Not everyone is buying the theory that this year will follow history. For example, Bill McBride, who runs the notable economics blog Calculated Risk, recently penned an entry explaining why he believes housing will cross a significant milestone in the late summer, with the year-on-year Case-Schiller Index of prices turning positive for the first time in more than six years. "At the current pace of improvement, it looks like the YoY change will turn positive in either the August or September reports." Others have adopted a more flippant attitude in the face of doom-and-gloom forecasts. A note to clients earlier this week by Art Cashin, a trading director at Swiss banking group UBS, reported on the IMF working paper and the interpretation by The Economist. Cashin's advice on how clients should take those news: "Try to enjoy your summer."
- http://www.ibtimes.com/
Posted by CoyotePrime at 4:11 AM