"Pathos of the Plutocrat" 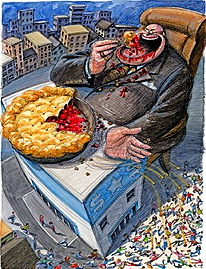 "Pathos of the Plutocrat"
By Paul Krugman

"You know, I've been around the ruling class all my life,
and I've been quite aware of their total contempt for
the people of the country."
- Gore Vidal

“Let me tell you about the very rich. They are different from you and me.” So wrote F. Scott Fitzgerald — and he didn’t just mean that they have more money. What he meant instead, at least in part, was that many of the very rich expect a level of deference that the rest of us never experience and are deeply distressed when they don’t get the special treatment they consider their birthright; their wealth “makes them soft where we are hard.” And because money talks, this softness — call it the pathos of the plutocrats — has become a major factor in America’s political life.

It’s no secret that, at this point, many of America’s richest men — including some former Obama supporters — hate, just hate, President Obama. Why? Well, according to them, it’s because he “demonizes” business — or as Mitt Romney put it earlier this week, he “attacks success.” Listening to them, you’d think that the president was the second coming of Huey Long, preaching class hatred and the need to soak the rich.

Needless to say, this is crazy. In fact, Mr. Obama always bends over backward to declare his support for free enterprise and his belief that getting rich is perfectly fine. All that he has done is to suggest that sometimes businesses behave badly, and that this is one reason we need things like financial regulation. No matter: even this hint that sometimes the rich aren’t completely praiseworthy has been enough to drive plutocrats wild. For two years or more, Wall Street in particular has been crying: “Ma! He’s looking at me funny!” Wait, there’s more. Not only do many of the superrich feel deeply aggrieved at the notion that anyone in their class might face criticism, they also insist that their perception that Mr. Obama doesn’t like them is at the root of our economic problems. Businesses aren’t investing, they say, because business leaders don’t feel valued. Mr. Romney repeated this line, too, arguing that because the president attacks success “we have less success.”

This, too, is crazy (and it’s disturbing that Mr. Romney appears to share this delusional view about what ails our economy). There’s no mystery about the reasons the economic recovery has been so weak. Housing is still depressed in the aftermath of a huge bubble, and consumer demand is being held back by the high levels of household debt that are the legacy of that bubble. Business investment has actually held up fairly well given this weakness in demand. Why should businesses invest more when they don’t have enough customers to make full use of the capacity they already have?

But never mind. Because the rich are different from you and me, many of them are incredibly self-centered. They don’t even see how funny it is — how ridiculous they look — when they attribute the weakness of a $15 trillion economy to their own hurt feelings. After all, who’s going to tell them? They’re safely ensconced in a bubble of deference and flattery. Unless, that is, they run for public office.

Like everyone else following the news, I’ve been awe-struck by the way questions about Mr. Romney’s career at Bain Capital, the private-equity firm he founded, and his refusal to release tax returns have so obviously caught the Romney campaign off guard. Shouldn’t a very wealthy man running for president — and running specifically on the premise that his business success makes him qualified for office — have expected the nature of that success to become an issue? Shouldn’t it have been obvious that refusing to release tax returns from before 2010 would raise all kinds of suspicions? By the way, while we don’t know what Mr. Romney is hiding in earlier returns, the fact that he is still stonewalling despite calls by Republicans as well as Democrats to come clean suggests that it could be something seriously damaging.

Anyway, what’s now apparent is that the campaign was completely unprepared for the obvious questions, and it has reacted to the Obama campaign’s decision to ask those questions with a hysteria that surely must be coming from the top. Clearly, Mr. Romney believed that he could run for president while remaining safe inside the plutocratic bubble and is both shocked and angry at the discovery that the rules that apply to others also apply to people like him. Fitzgerald again, about the very rich: “They think, deep down, that they are better than we are.”

O.K., let’s take a deep breath. The truth is that many, and probably most, of the very rich don’t fit Fitzgerald’s description. There are plenty of very rich Americans who have a sense of perspective, who take pride in their achievements without believing that their success entitles them to live by different rules. But Mitt Romney, it seems, isn’t one of those people. And that discovery may be an even bigger issue than whatever is hidden in those tax returns he won’t release.”
- http://www.nytimes.com/
•

“They think, deep down, that they are better than we are.” Well folks, as much as I'd love to, this blog's PG rating prevents my fullest expressive reaction of that sentiment, and loathing of them, for that matter. What do "you people" think, as Anne Romney describes you?
- CP
Posted by CoyotePrime at 4:09 AM