Rollo May, "The Courage To Create" 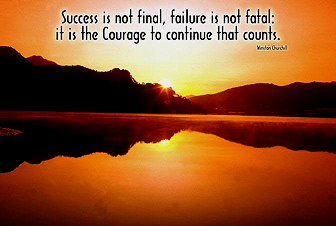 "The Courage To Create"
by Rollo May

"We are living at a time when one age is dying and the new age is not yet born. We cannot doubt this as we look about us to see the radical changes in sexual mores, in marriage styles, in family structures, in education, in religion, technology, and almost every other aspect of modern life. And behind it all is the threat of the atom bomb, which recedes into the distance but never disappears. To live with sensitivity in this age of limbo indeed requires courage.

A choice confronts us. Shall we, as we feel our foundations shaking, withdraw in anxiety and panic? Frightened by the loss of our familiar mooring places, shall we become paralyzed and cover our inaction with apathy? If we do those things, we will have surrendered our chance to participate in the forming of the future. We will have forfeited the distinctive characteristic of human beings‚ namely, to influence our evolution through our own awareness. We will have capitulated to the blind juggernaut of history and lost the chance to mold the future into a society more equitable and humane. Or shall we seize the courage necessary to preserve our sensitivity, awareness, and responsibility in the face of radical change? Shall we consciously participate, on however small the scale, in the forming of the new society?

I hope our choice will be the latter. We are called upon to do something new, to confront a no man's land, to push into a forest where there are no well-worn paths and from which no one has returned to guide us. This is what the existentialists call the anxiety of nothingness. To live into the future means to leap into the unknown, and this requires a degree of courage for which there is no immediate precedent and which few people realize.

This courage will not be the opposite of despair. We shall often be faced with despair, as indeed every sensitive person has been during the last several decades in this country. Hence Kierkegaard and Nietzsche and Camus and Sartre have proclaimed that courage is not the absence of despair; it is, rather, the capacity to move ahead in spite of despair. Nor is the courage required mere stubbornness. But if you do not express your own original ideas, if you do not listen to your own being, you will have betrayed yourself. Also you will have betrayed our community in failing to make your contribution to the whole.

A chief characteristic of this courage is that it requires a centeredness within our own being, without which we would feel ourselves to be a vacuum. The "emptiness" within corresponds to an apathy without; and apathy adds up, in the long run, to cowardice. That is why we must always base our commitment in the center of our own being, or else no commitment will be ultimately authentic.

Courage, furthermore, is not to be confused with rashness. What masquerades as courage may turn out to be simply a bravado used to compensate for one's unconscious fear and to prove one's machismo, like the "hot" fliers in World War II. The ultimate end of such rashness is getting one's self killed, or at least one's head battered in with a policeman's billy club‚ both of which are scarcely productive ways of exhibiting courage.

Courage is not a virtue or value among other personal values like love or fidelity. It is the foundation that underlies and gives reality to all other virtues and personal values. Without courage our love pales into mere dependency. Without courage our fidelity becomes conformism. The word courage comes from the same stem as the French word coeur, meaning "heart." Thus just as one's heart, by pumping blood to one's arms, legs, and brain enables all the other physical organs to function, so courage makes possible all the psychological virtues. Without courage other values wither away into mere facsimiles of virtue.

In human beings courage is necessary to make being and becoming possible. An assertion of the self, a commitment, is essential if the self is to have any reality. This is the distinction between human beings and the rest of nature. The acorn becomes an oak by means of automatic growth; no commitment is necessary. The kitten similarly becomes a cat on the basis of instinct. Nature and being are identical in creatures like them. But a man or woman becomes fully human only by his or her choices and his or her commitment to them. People attain worth and dignity by the multitude of decisions they make from day to day. These decisions require courage. This is why Paul Tillich speaks of courage as ontological; it is essential to our being.”
Posted by CoyotePrime at 8:37 PM

Email ThisBlogThis!Share to TwitterShare to FacebookShare to Pinterest
Labels: Rollo May